the end might be near but it aint until it is

$SPY staged another impressive breakout of a basing pattern to new all time highs. Last week I wrote it was real tough to be bearish given the recent price action and that I was looking for a new all time highs later in the week.  Everything went as planned (rare occurrence) and now here we are again at all time highs. You can see we already developed a higher level base between 170 and 170.75 and we made a run for the breakout at the close on friday. Nothings changed from last week, except now we have a higher level base and levels to work against. All is good in the hood so long as price stays above 170, below there and we could see some fast money move to the sidelines. Stay long, enjoy the trend, the end might be near but it aint until it is. 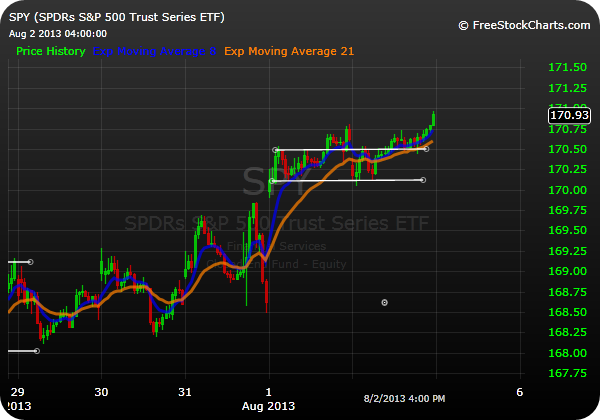 $AAPL The markets never make things easy so when you have clear tight patterns you must take advantage of them when they present themselves. Cup and handle, inverted, flag breakout, i don’t care what you label it, apple saw a clear breakout from a very tight pattern at multi-day highs. The greatest part was thursdays close tipped it’s hand to the breakout! That seems to never happen. Had apple closed thursday within that tight range it would make it much more difficult to hold long overnight and thus catch the breakout on friday. But even if you didn’t want to hold anything overnight apple gave you two chances to fill up again at the breakout level on friday morning. Stick with the long while it’s working, know that it can change character at any time, enjoy it while it hasn’t. 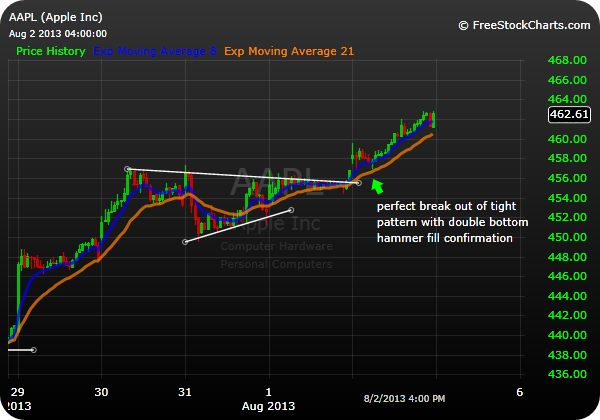 $GOOG just as everyone forgets google and leaves it for dead it begins to pop it’s head out of the chop again. Nice healthy basing action with a breakout above that psychological 900 level. Looks ripe within this base for higher very similar to the markets and alot of other setups this week. 900 is your level in the sand toggling bullish to neutral and as long as it can hold that level we should be able to see higher prices. Very in play to the long side this week. 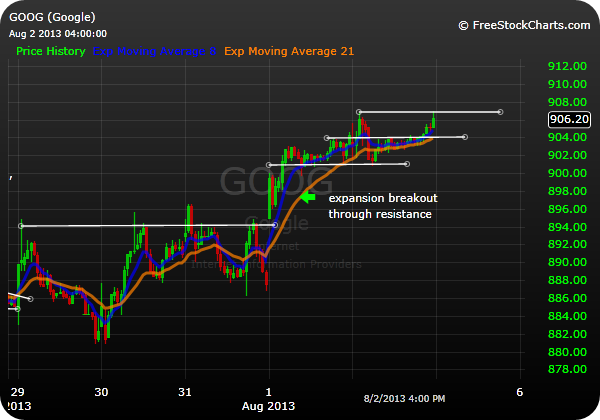 $NFLX the laggard of the week goes to netflix this time around. While most other stocks were breaking out of bases you can see netflix remained inside one. In the larger picture netflix still remains neutral within this 240-250 10 point range and hasn’t really done anything wrong except take it’s time. However short term you have to expect more chop and a possible test of the lower end of the range. Last week i questioned whether or not this stock was finally going to change it’s bullish character after a remarkable 2013 run. We still can’t say it has, although it does become more suspect. And remember the longer it churns, the larger the break. 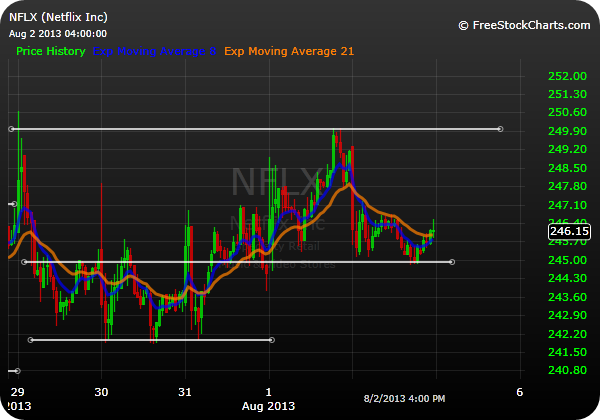 $FB the party hasn’t stopped in facebook. Another bull push higher on Monday followed by four days of consolidation. We can see it carving out this new range at the highs about 38.40 with the lower end coming in about 36.80. Surely overbought on many metrics on larger timeframes but so long as it can hold above the lower end of the range i see this bull march continuing. A great run all triggered by earnings that I personally haven’t been much apart of, but congrats for those who have. Stick with whats working. 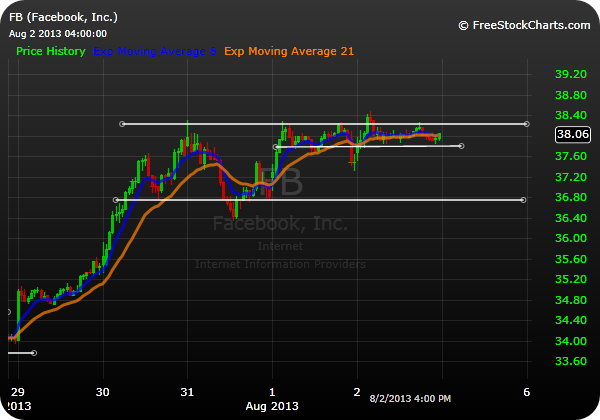 $AMZN well my top pick of last week was about as wrong as it could get. We saw nearly a full fade of last weeks move  until finally catching some buyers around and below the 300 mark. Certainly not great signs on the intermediate term but for now we’ll play the levels given to us, and on the downside it seems like 300 is a good level to shoot against. If it can fill in this base a bit more and make another push at 306 we may have a nice reversal trade back up to the highs. What you don’t want to see is this 300 level get broken and make another leg down. That action would suggest the top is in intermediate term in amazon for some weeks. 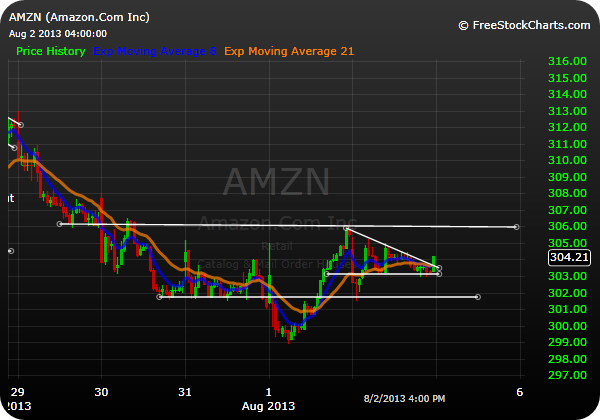