trade in may to chop away

$SPY well another week in the books with of alot of price noise but not much directional advancement one way or the other. This range continues to chop on, call it 185 to 189 setting the stage for a bigger and bigger  future breakout. In last weeks post the bulls are back in town I outlined 4 reasons why I would be a buyer of an upside breakout above 189 and all of those points remain valid a week later. I talked about this upper level of support at 187 as an important area for the bulls to hold onto this week and they did exactly that. The bulk of earnings season is over and the lighter volume summer months are fast approaching. From a intermediate/long term perspective not much has changed this week and the market remains very stock and sector specific. Try not to get chopped up out there, for all we know we could be in this range for another 2 months so try not to drain your emotional capital during this back and forth action. It’s a beautiful day here in New England so enjoy the weather and have a happy mother’s day! 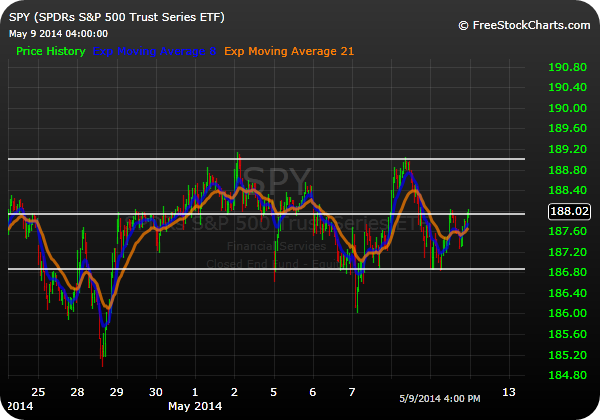 $AAPL this is a good chart to illustrate the importance of time frame. In apple this week we broke below 588 which has been support in a 2 week long horizontal range. On this 15 minute timeframe we have a break of support, a series of lower highs and downward sloping moving averages. The path of least resistance is lower. However if you were to look at Apple on a daily chart you would see a 70 point earnings gap and run to the upside followed by an orderly flag lower currently retracing almost 20 points of that move. As a participant on that timeframe this action is healthy and bullish. With that said, know your timeframe and trade accordingly. For day trades next week I will be looking for short setups until the market suggests I shouldn’t.

$GOOG broke down this week after coiling against 530 resistance for a few days. In last weeks recap I talked about two trade ideas. The first was a long if we saw follow through bullish action above 530 and the second was a short setup down to 502 if we lost 522. It was the breakdown that carried out, we got a test of nearly 502 where the bulls stepped up and supported a bounce to the midpoint of this range. At 518 it’s anybody’s guess, flip a coin and keep an eye on 504 support and 530 resistance. 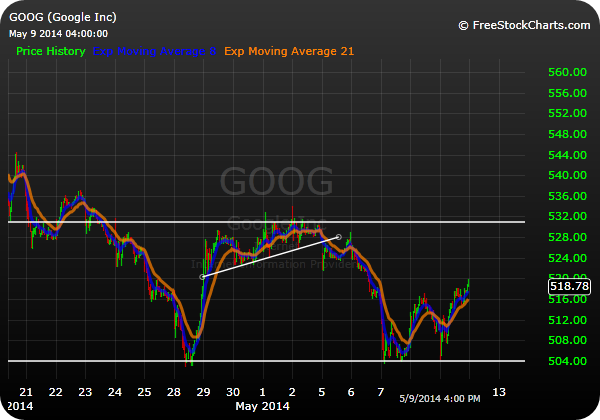 $NFLX similar to Google this week Netflix broke down from its rising channel, probed lower and found support around 315 before putting in a small bounce. One may also notice the potential head and shoulders pattern here where a break below 315 or really 312 would signal trouble ahead for Netflix. It’s a great vehicle to trade intraday, but the range is very wide and isn’t offering any clear longer term directional swing setups as of yet. Stay nimble. 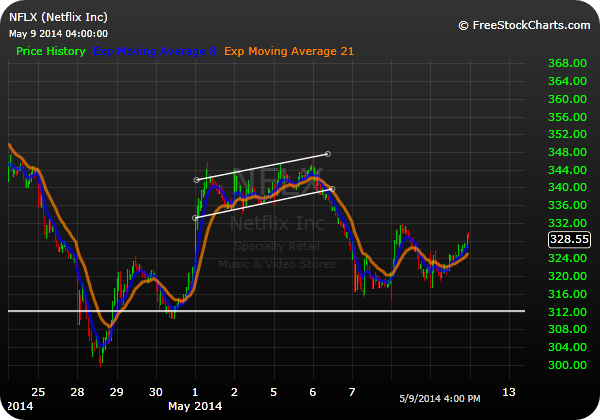 $FB good old mr. reliable. Facebook continues to carve out this very clean 8 point base. I’ll reiterate the damage here in Facebook over the past couple months has been minimal compared to some of the other high growth names. I tend to believe Facebook will be one of the first to break out of it’s respective range (either up or down) and others will likely follow suit.

$AMZN rallying above support on Friday Amazon reclaimed 288 and is showing early signs of reversing higher up into this 15 point range. Amazon remains in a very clear intermediate term downtrend and I think like any of it’s peers this remains a solid day trading vehicle right now but not a whole lot for swing traders. Longer term charts still need more time, stay nimble. 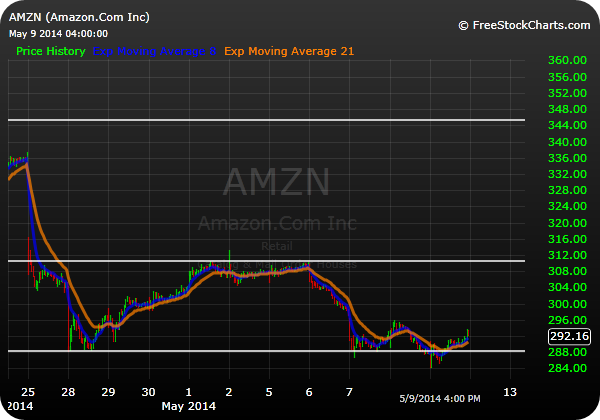 $TSLA reported earnings this week and surprise surprise, the market reacted by selling off the name. It made a quick pump and dump squeeze attempt to fill the gap on thursday but ultimately rolled over and headed lower. Tesla showed early signs of trying to stabilize under 180 on Friday but I always remain suspect of higher profile names immediately after reporting earnings due to the the heavy involvement of option market makers. Typically I find the ‘real’ market motives follow through the week after the option games are over with. Short term the stock needs to reclaim 184 and ultimately close the earnings to negate some of this bearish pressure on the stock. Until then, the path of least resistance remains lower. 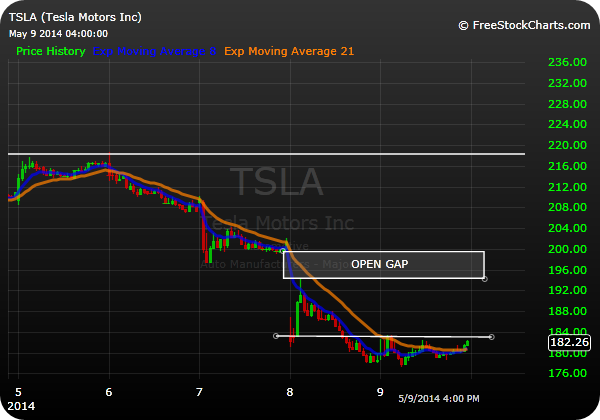