trade setups in preparation of earnings

$SPY managed to tag new intraday all time highs this week despite the bears break down attempt kicking off the week on Monday’s session. The bulls couldn’t quite hit the ground running as new all time high prices in the index was met with some mild profit taking and aggressive shorts causing a sideways to down flag to develop into the end of the week. The bulls didn’t necessarily have the momentum to push us through the highs on the first retest but that doesn’t mean its time to pack up your bags and join the bears. It’s really tough not to have a bullish bias at current levels so close to all time highs. The clear action area for the bulls is a break and close above 185, and until that happens the market is in danger of dripping lower back towards the bottom end of this 182-185 range. The biggest catalyst right now is earnings season and we are going to be hit with more releases this week which should start influencing price action on a sector by sector basis. I am going into next week with an overall bullish bias and a light long lineup of swing positions.

$AAPL so much for that possible break away gap. Apple looked sick this week as price just put in a base below a base breaking down from each one with no signs of strength from bulls. Apple has risk down to 530 where the bulls previously stepped up and put in a 30 point reversal. The important thing for the bulls next week will be to either put in a higher low above 530 or at minimum hold the 530 level. I still remain fairly constructive on Apple in the intermediate term and I think its doing the work necessary to shake out and digest this 500+ move that started late last year. Definitive close below 530 would have me changing my tune to more neutral/negative. I will be watching close next week for signs of life. 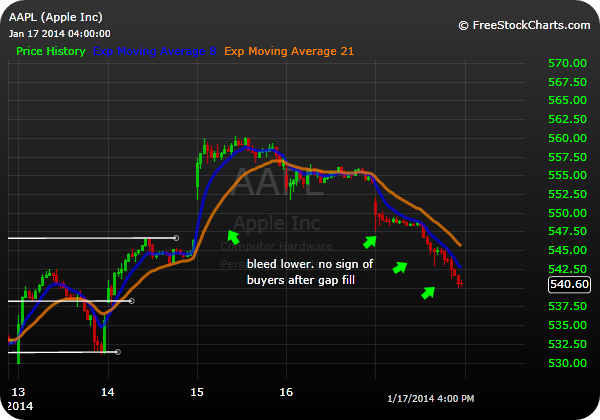 $GOOG continuing to show signs of leadership in 2014 Google pushed new all time highs this week but like much of the market it pulled back some heading into Friday. Google got a small bounce on Friday off some near term support right around the previous all time high of 1147. To maintain ‘momentum’ and a gold star for its market leader 2014 status we would want to see Fridays lows hold otherwise it has risk of falling to the bottom end of its previous pivot around 1120. Looks great. 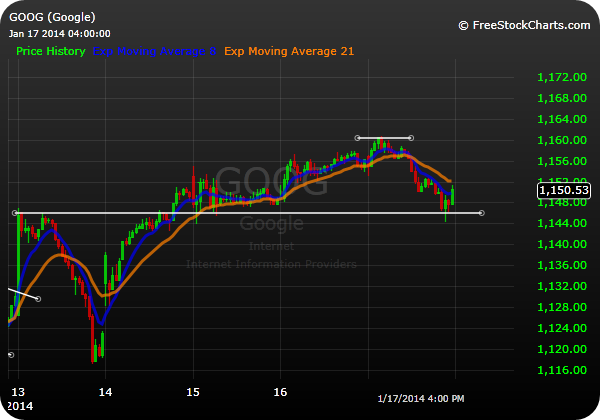 $NFLX continues to slide lower ever since breaking down from the multi week rising channel back at the end of 2013. Price is contracting here at this 330 level and a break out of this triangle should pave the path to a short term directional move either down to retest the 320 lows or a reversal attempt back to about 345 where it should run into some overhead supply.  Netflix offered some great day trading opportunities this week (profit leader in my real time trade alert service this past week) and given it’s current ‘broken’ intermediate price action it seems best only to stick to day trades in this name right now until it can show further signs of firming action. 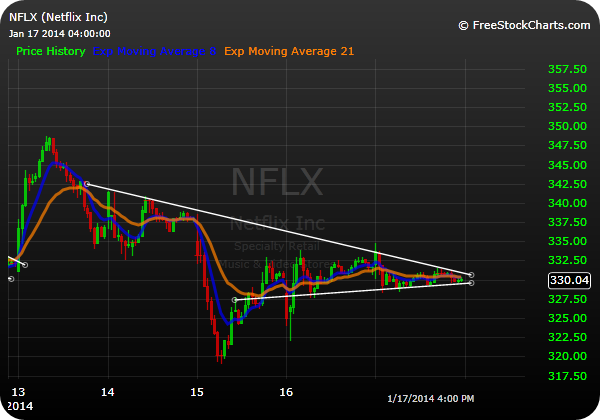 $FB similar to the $SPY , Facebook finds itself dancing around all time highs but not quite having the ammunition to break through and continue a new leg higher. $57.20ish is roughly the breakdown level from it’s high level base that I would need to see Facebook reclaim before I became interested in catching the next move higher. Until it can reclaim that level it has risk down to short term support around $55.50 followed by another level of  support around $54. Stick to day trading or watch those levels for possible entries.

$AMZN intermediate term sideways channel is drawn over this weeks price action and you can see we almost made a run for it on Friday above $402 before succumbing to the  markets pull. Amazon has been in this sideways channel at all time highs from 390 to 405 for just over a month now so it certainly has some fuel in the tank once it breaks out of this range. This is one of my positions in my swing account, a small piece about 1/2 full position size long at 395. I am looking to add on strength on a confirmed breakout above 405 with a stop at a close below 390. 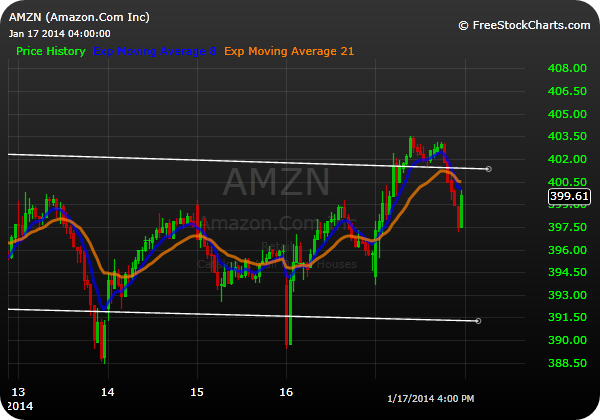 $TSLA powerful move higher on Tuesday when headlines hit of the companies better than expected vehicle sales this past quarter. We entirely engulfed a months worth of price action in a single day and we spent the rest of the week tightening up in a high level base against 173. Looks great for higher prices, showing signs of pent up momentum that this move isn’t over yet. I will be watching this closely next week for continuation.