trade setups into the end of the year

$SPY four days this week the indices pulled back making lower lows and lower highs within this falling wedge on the 15 minute chart until the market used the jobs number as its excuse to break out from this pattern to the upside on Friday. The bulls held support exactly where they needed too at about 178.50 and given the size of the gap and hold on Friday it seems very likely the previous all time highs around 181.75 would come into play next week. The tricky part with this action (and why it is likely to continue ) is all of the upside was captured off of the unemployment report pre-market on Friday morning. That means if you weren’t exposed long in the markets by the close on Thursday its tough for you to have captured any of this 1 day upside so far. For that reason I think this could certainly continue higher throughout next week leaving people in the dust if they are not willing to pay up and get on board at these levels if they passed on getting involved in the 4 day sell off. 180 to 181.75 is the immediate risk range I will be looking at into next week, if the bulls cannot defend the open gap then 178.5 will be back in play. 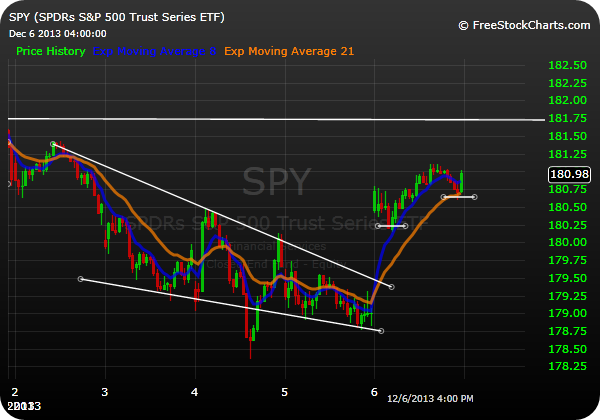 $AAPL had a relatively sideways week which is very healthy for the stock after extending its upside scream higher to 8 days by Thursday. The 15 minute chart here displays a pretty clear short term head and shoulders topping pattern after the frothy 50 point run. I certainly believe the stock could put in a healthy rest, as I called for last week, but I remain skeptical that such an obvious head and shoulders pattern could trigger leading to lower prices when so many traders out there seem eager to “buy the dip”. Regardless, the action here is very healthy on an intermediate term, dips should be looked at as opportunities until we see more evidence suggesting otherwise. 560 – 574 immediate risk range. 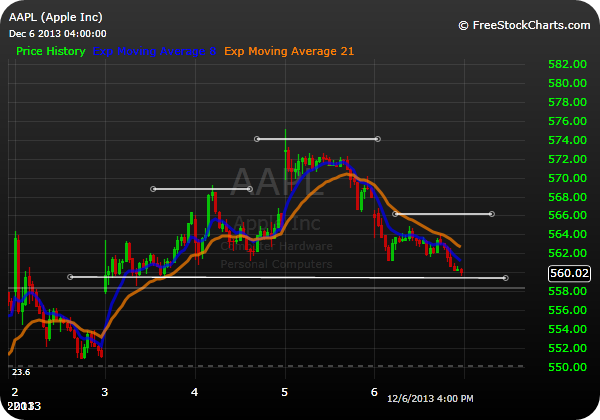 $GOOG had a much more shallow pull back this week on a relative basis but the action between the 10ish point triangle it formed certainly came with some volatility as the swings from 1050 to 1060 were quite fast and furious. I was long this name coming into the week and immediately was stopped out on Monday around 1057 as it broke down from the high level consolidation I had been watching. It didn’t take me too long to get back involved because on Wednesday I jumped back in around 1052 using a close below 1050 as my stop. Fridays move was very impressive making new all time highs and I would suspect higher prices to continue next week so long as the market does not puke back the gap and gains it made from Friday. I really like this name into the end of the year and I think 1100 could come quick, after all thats only a 2.5% move. My stop has been trailed higher to about the 1060 level. 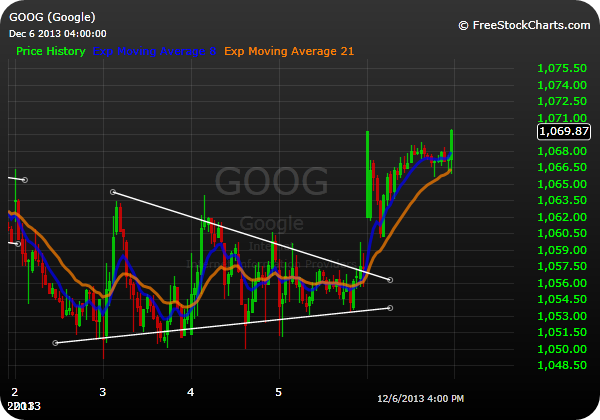 $NFLX heres another name that finds itself trading within a falling wedge getting real tight against some 350-355 support. The consolidation its putting in is still certainly healthy within the context of the past several week bullish grind higher, the problem being, it did not participate in Fridays breakout as most other stocks did. I did get involved in this name on Friday around 355 and given its poor close I decided to take nearly half of it off given it has not shown any real signs of reversing here. If we can get a breakout to the upside I will add my other half back, otherwise I will be watching the 350 level to hold as my stop. 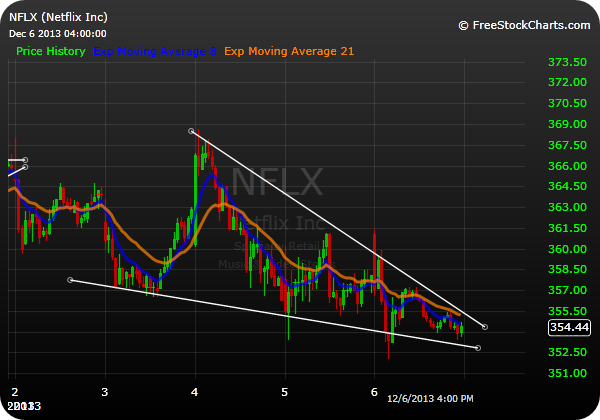 $FB shaping up a bit here, Facebook seems like it is trying to come alive after busting through the 47.30ish resistance level and making a high above 49 this week before cooling off and closing around 48. I picked some up long on the breakout bar about 47.3x on Wednesday and I continue to hold it into the weekend. I didn’t particularly like the action on Friday but I am willing to hold onto it into next week using about 47.50 as my stop. I like the potential upside here and I also like that it has fallen off the radars of most traders after going into this multi-week lull.

$AMZN a great week of consolidation in Amazon coming off a strong 7 day ramp up in consecutive all time highs. We can see it still really needs to clear 390 to break out of this nice looking semi-rounded base which would set up a retest of the highs and a key psychological level of $400. A name that I will be watching very closely early next week for a momentum trade above Fridays highs and a possible swing entry. 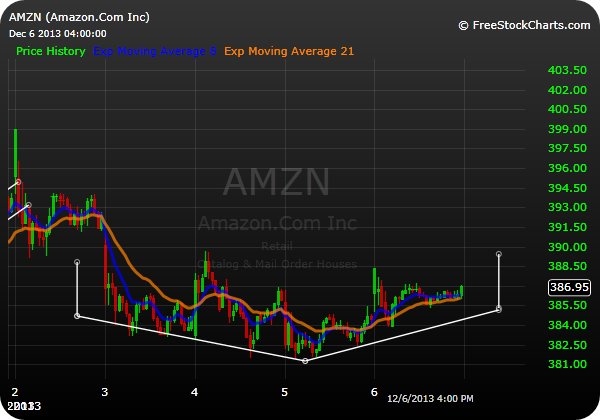 $TSLA a great week for this name as Tuesday morning opened with a large gap up into resistance that didn’t seem to phase buyers until the next day when Tesla slowed down and started going sideways developing this descending triangle against 135 support. It is certainly possible given the action this week that Tesla has finally reversed this multi week down trend that it has been in so it will be important to watch going forward to see if Tesla can hold onto this gap and begin forming higher lows and highs. Resistance at 145 should be pretty firm, so the other scenerio is just a larger multiweek trading range between the 115 lows and this 145 level. Time will tell, nothing I am interested in just yet from a swing perspective, I will continue to day trade. 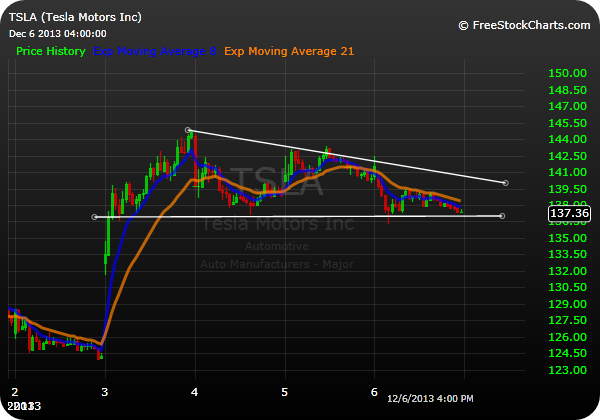