VIX spike & all hell does NOT break loose

A quick site programming note. I just finished up a new 75 minute video series the successful trader  where I walk through the core components that I believe make up a profitable trader and outline those thought processes with ways to improve your own trading. The series is in the members-only section, which only requires a free site membership. So sign up now and go watch! 🙂 Now onto the recap.

$SPY what a week! Last week in my recap, summer volatility on the rise, I analyzed the violent spike down into support on the $SPY (7/10) followed by a snap back rally towards the top of this range. This week, we repeated the same behavior on Thursday which ended with more than a 1% move  to the downside meanwhile the $VIX surged 30% that same day. Another slam down of that magnitude into support that was just tested 5 days earlier is sure to break, right? Wrong. The bulls make a near full recovery the next day by opening the day with a small gap up and continuing to plow higher into the end of the week. The action, while very impressive, reminded  me why my own opinion does not matter in the markets. I was fairly confident we were going to continue lower or base out at the lower end of this range on Friday and instead we jumped on a rocket ship and exploded higher. This is why I preach, objectively analyzing the markets and not your own thoughts, which are often wrong. Thankfully I did not act on my own thoughts.

Going forward, we are in this chop box of a range from 196 to 198.15 and things are violent. Try not to get whipsawed in this action and remember to keep a watch out for individual stocks releasing earnings. I’ll be watching for a break of this range, either up or down. 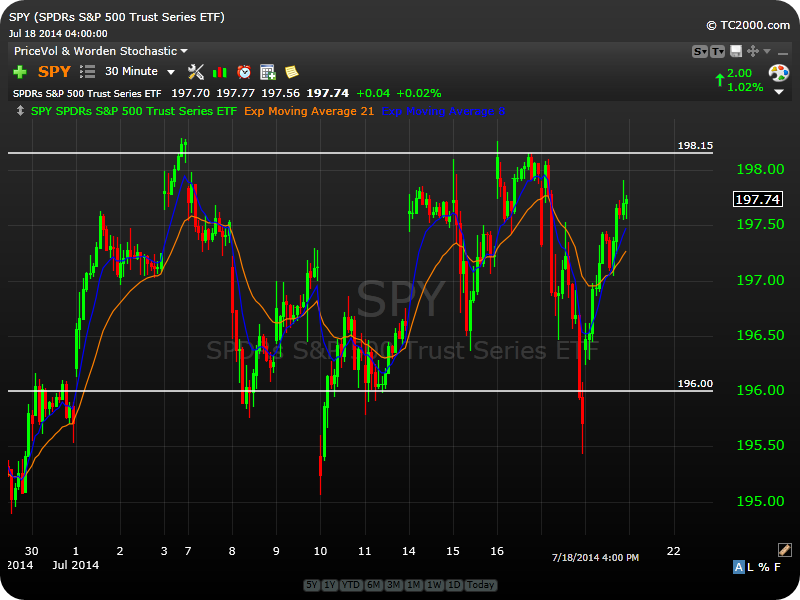 $GOOGL here was one of our first big tech names to report earnings this past week and the market responded favorably to the report. Google has been failing against this 595 resistance over the past couple weeks now but earnings finally gave it the catalyst to break through this level and make its way into the 600s. All time highs are at 614 and it seems very likely we can a get a retest of them in short order. A recent breakout in a strongly uptrending stock, this is something I want to be apart of on the long side. We got a cool 7 points out of it on the long side on Friday in real-time trade alerts, I wouldn’t mind 7 more next week. 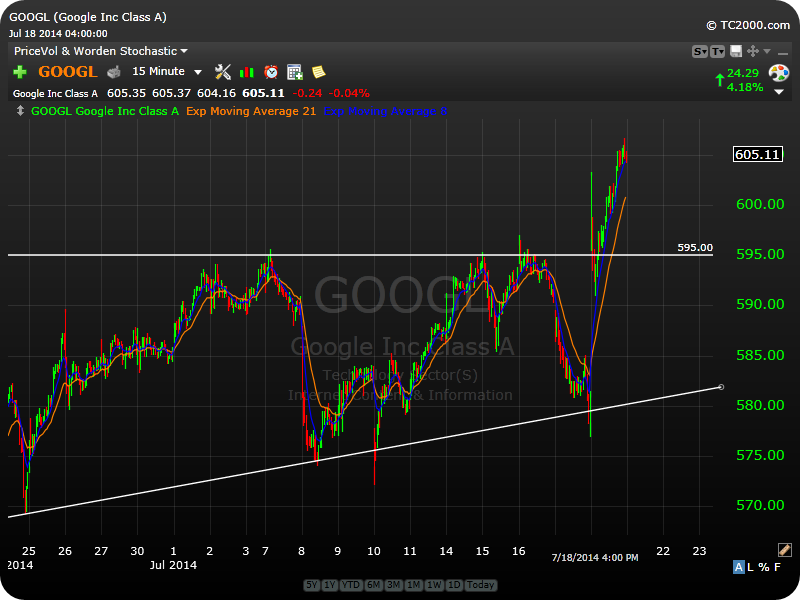 $FB just look at this v-shaped rally taking place on Friday as facebook opened at the bottom end of the range at $66 and did nothing but power higher all day, even piercing above $68 resistance by the end of the day. A very impressive move by the bulls and one that should be on watch next week for continued follow through and breakout action. All time highs in facebook are around $72 and by the looks of it, this $68 is the only significant level of resistance in between current prices and those all time highs. 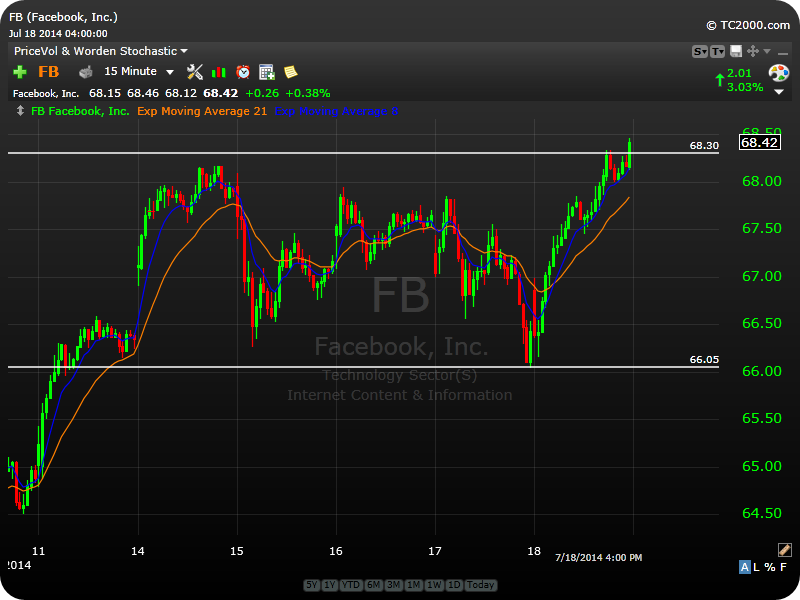 $AMZN another name that closed into resistance this week and looks poised for continuation going into Monday. Amazon spent this entire week carving out a high level base as the path of least resistance continues to be higher. This is one of my favorite setups heading into next week and I”ll be looking for intraday long setups above 360.  Amazon reports earnings on Thursday 7/24. 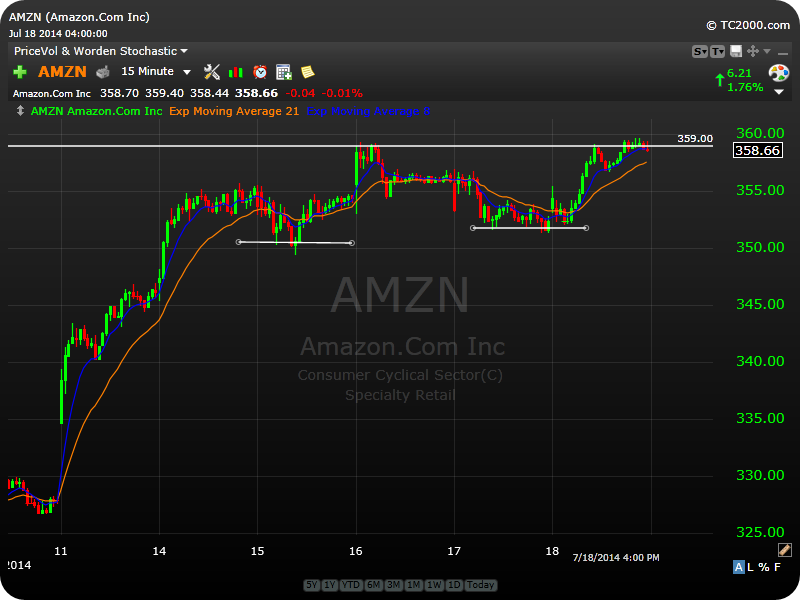 $TWTR is a high growth name that has been under-performing its peers as of recently. Twitter is still carving out a retracement from the $12 run it went on from $30 to 43 this past June. Friday’s bullish reversal candle looks encouraging that the dip buyers are going to defend this $36 area but really I want to see more price action trade around these levels to provide a good solid base to lift higher from. We still have another full week of trading before twitter earnings on 7/29. Keep this on watch. 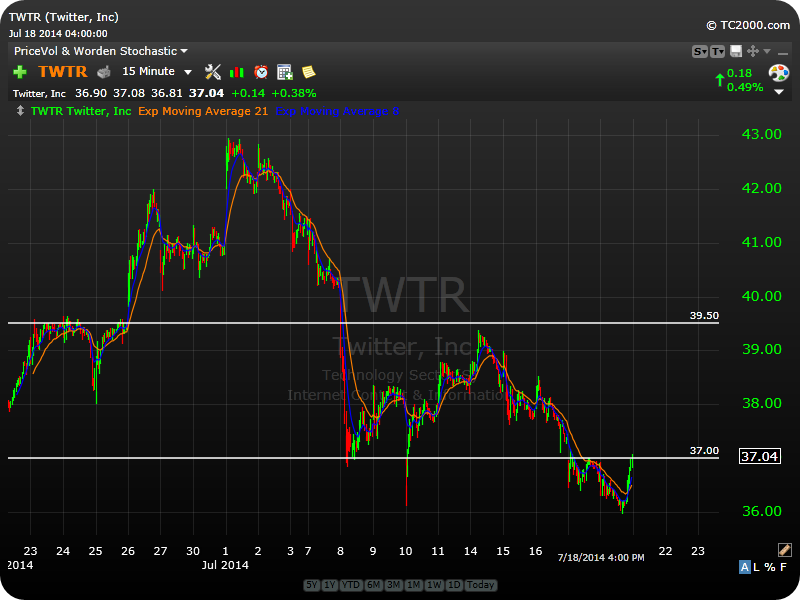