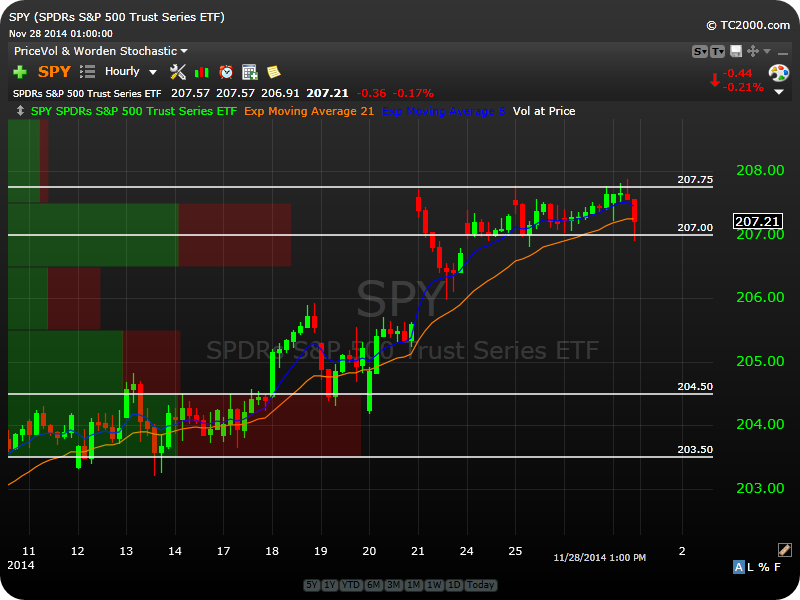 $SPY for all of those in the US I hope you enjoyed a relaxing Thanksgiving with friends and family and got a little well deserved time away from the markets. Overall action this week was relatively quiet and volume levels were light as expected. After the 3 and half trading sessions, we managed to tack on mild gains on top of this recent uptrend, and support levels are neatly stacking up below us. 207 is the most immediate level of support to have on watch coming into next week. Below there, our next level to keep an eye on isn’t until down around 204.50. The bulls have done an amazing job keeping energy pent up in this recent rally but that could all come to an end if 207 starts to crack next week. On the other hand, if support holds just as it has been over the past couple months then the highs around 207.75 will be next actionable momentum level for the bulls to sink their teeth into. So with time running out in 2014 this market continues to behave nicely for bulls making higher lows and higher highs. Bottom line: I’ll continue to follow the trend higher until I get a reason not too. 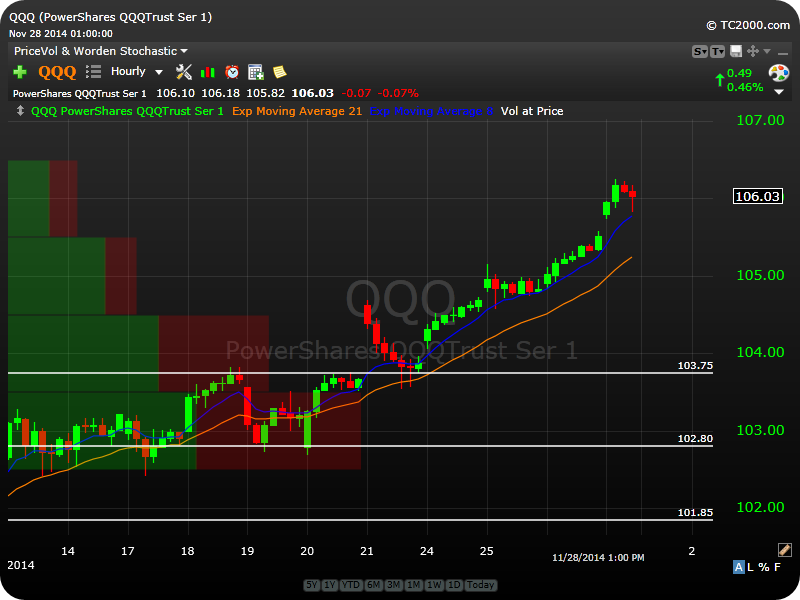 $QQQ here was our big performer this week relative to its other indices. You can see the difference here with the  QQQs as it has been in a strong uptrend this entire week as opposed to the $SPY which has been stuck relatively range bound. Names like Apple, Facebook, and Amazon all helped lead this one higher this past week. Tough to be a bear in this environment. Stick with the trend. 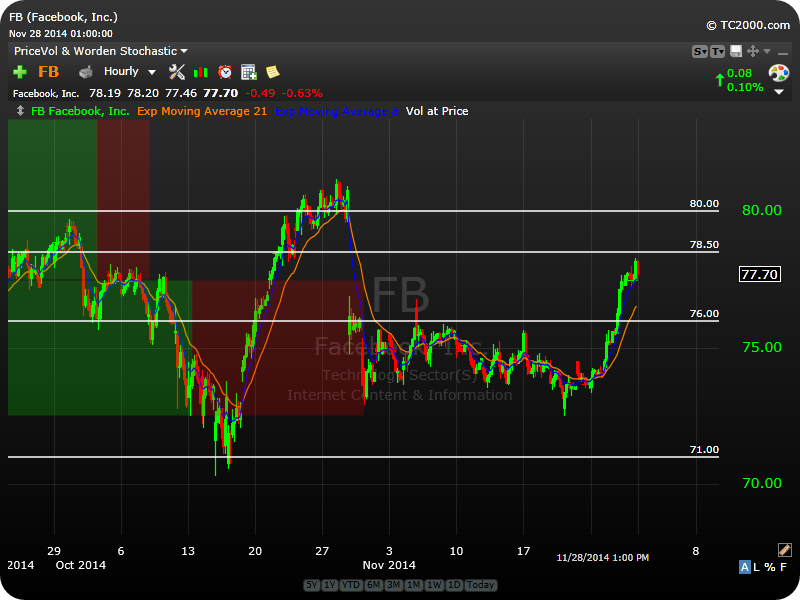 $FB spent 3 weeks following earnings consolidating tightly around $75 with a hint of downside bias. This week momentum came roaring in and the bulls stepped up and broke through at least one key level of resistance. $76 which has been the highs for the past 4 weeks was taken out and left behind with a strong close from the bulls to end the week. When you look at the longer term action in Facebook, there’s still a band of resistance between 78.50 and 80 that can keep a lid on price advancing much further if the bulls can’t continue their press. Interesting name to have on watch into the end of the year as a move above 80 could really get this in motion for a sustained intermediate leg higher to new all time highs. On watch. 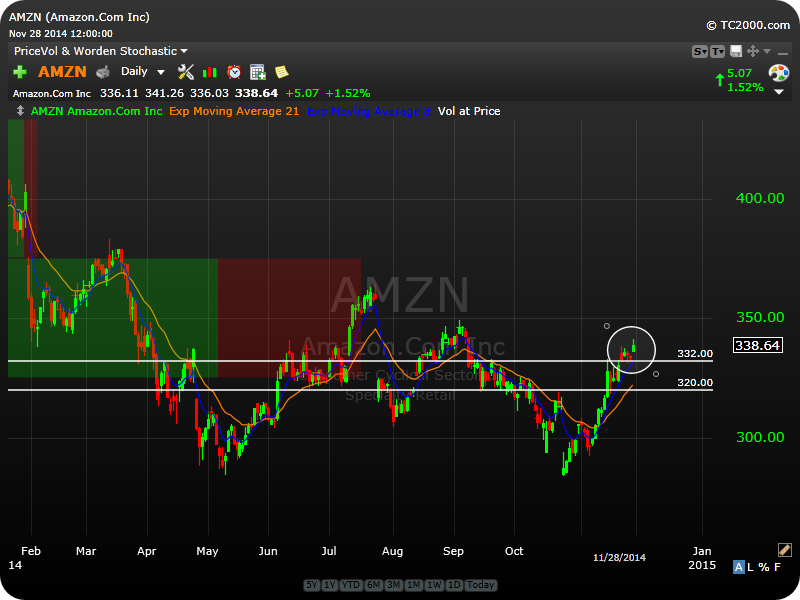 $AMZN we’re looking at a daily chart in Amazon this week to show the heavy lifting the bulls have just done over the past few weeks. This band of resistance between 320 to 332 is an area I was viewing as a point of control between the bulls and bears. Below it, it’s a more interesting short (or avoid) and above it, it’d be an interested long. After this past week we are now firmly back above this area of resistance and Amazon is back on my good list. I don’t see a trade in it right here for my style, but I will be stalking action going forward for new long setups. Looks good. 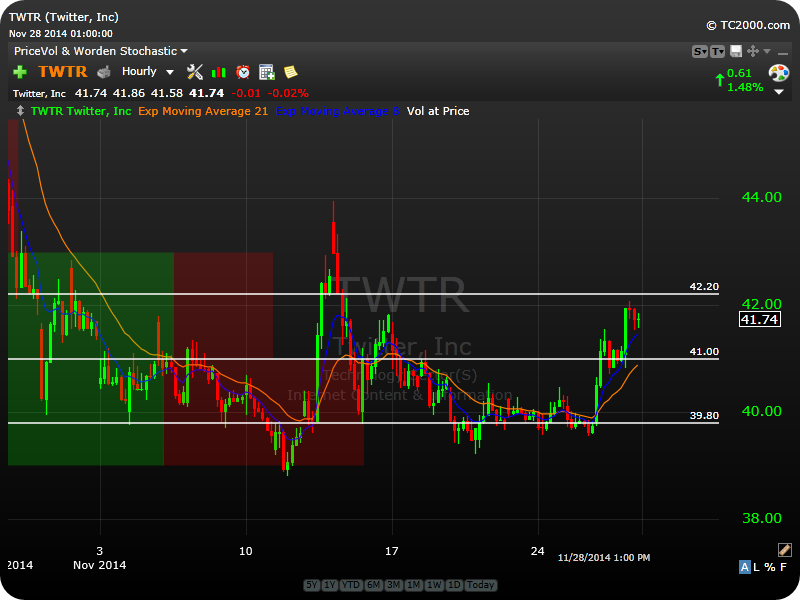 $TWTR similar to Facebook, Twitter also saw a shot of momentum return this week as the bulls sailed higher above 40, and broke through some important resistance at 41. Twitter bulls did some nice work this week but it’s still a bit messy around here from a price action point of view until we’re clearly above 42. This is a name Trade Risk members got involved in around 40.48 and then added some more around 41.4 to give us an average in the 40.70s. The action this week is promising and as long as it can hold above 41 I’ll continue to hold on for further upside. Watch 42 for the next actionable level. 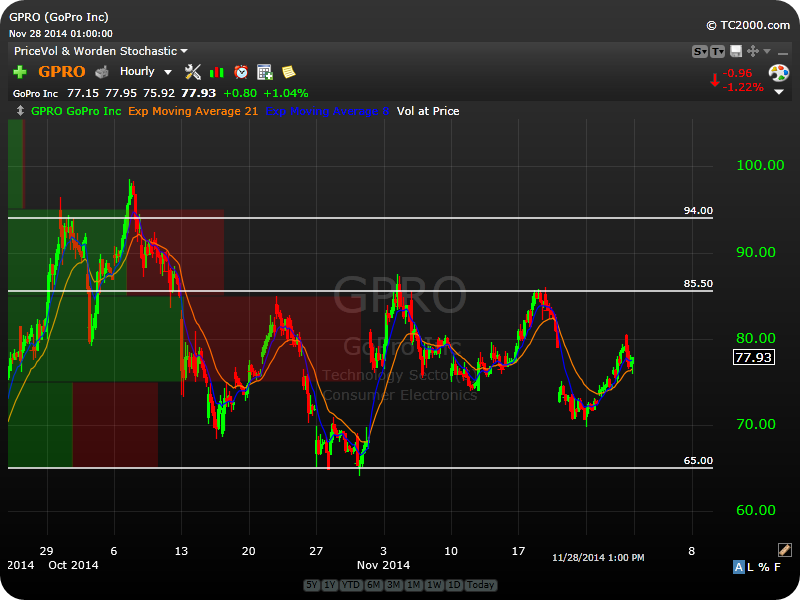 $GPRO bulls made themselves known this week as they finally stepped up and stopped the drift lower post their earnings report. Looking at the big picture GoPro is still in a large messy range between 65 and 85. We trade breakouts and changes in character here at The Trade Risk so we would really need to see price tighten up further to provide a new actionable level or clear that larger 85 resistance before jumping on any new trades. The bulls definitely got the ball rolling this week but try not to get chopped while price is still contained in this larger range.