why I gave the bulls a second chance

Before I begin this weeks recap I want to make an update that I have just about finished coding a new automated strategy for the NinjaTrader platform thats purpose is to act as a safety net for the discretionary trader. It will automatically close losing positions that have gone too far against you and monitor your overall account against drawdowns. Take a look at this page if you are interested in reading more information. I will also be looking for a couple of people interested in testing this out for me on their own platforms in the coming weeks, so please e-mail or tweet me if this is something you would like to try out. Now onto the recap:

$SPY got off to a turbulent start this past week as bears paraded their way across a number of sectors, namely high beta land which seemed to lead the way down Monday, Tuesday, and for the better part of Wednesday before seeing a reversal gap higher on thursday and follow through into Friday. The $SPY index was actually able to reverse all of Monday-Wednesdays sell off and end the week higher by the close on Friday, meanwhile only 1 stock that I track in the high betas was able to do the same. You can thank the $XLF for the SPYs reversal as it really flexed its muscles as the emerging leading sector into year end. As I mentioned last week I was long $FB $AAPL and $GOOG in my swing account over the weekend and I was stopped in each one at some point during Mondays sell off.

I sat on the sidelines for the remainder of Monday , all of Tuesday, and then eventually did some buying near the end of the day on Wednesday getting back involved long with $AAPL $GOOG $AMZN and then eventually some $TSLA on friday. I continue to believe the market is on a mission higher for the remainder of the year and the buy the dip action in the $SPY continues to confirm that thesis. High betas may have lagged this week but I still believe buyers can easily rotate into these names over the next week(s). 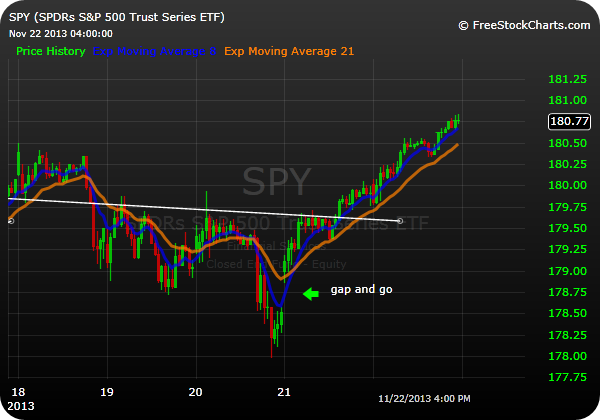 $AAPL traded in a very orderly downward channel from Monday into Thursday before cleanly breaking out and flagging at an obvious resistance point (and convenient opex strike). What made me want to get back involved in Apple after being stopped out on Monday (besides my overall market thesis into EOY) was the very orderly sell off it experienced this week. The stock did not maintain elevated levels of volatility with large range bars on heavy volume in any type of evacuation type fashion, instead it seemed to retrace nicely into multi-week support before finding aggressive buyers and breaking out to the upside. We’ll see how this unfolds, I am by no means married to this position and I have no problem stopping myself out a second time if this acts poorly into next week. 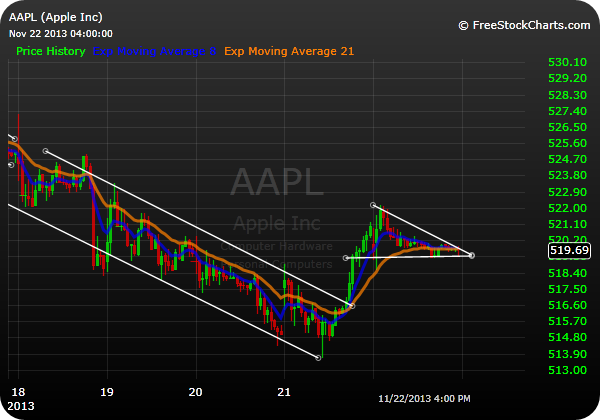 $GOOG is another name that I was stopped out in on Monday (1034) and got back involved with on Wednesday around 1024. I very much like what this name has done since its earnings report and I still very clearly remember the November 13th breakout bar higher which we barely retraced 50% of using the lows on Wednesday. I continue to believe roughly 1033 is a key level to break back above as you can see we traded around it at the end of last week. I would not mind seeing a higher pivot low get put in within this base around 1028 or so coming into next week but ideally I really want to see Google firm up within this base and resolve to the upside sooner than later. Basing action is healthy, and remember a stock this price is only a stones throw away from all time highs percentage wise. 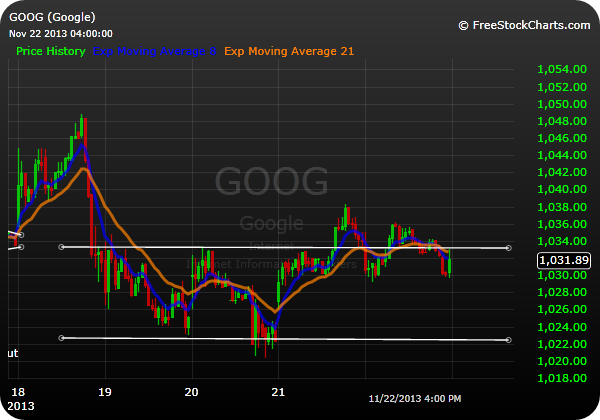 $NFLX all things considered held up very well this week as it basically closed the week unchanged from where it started. 350 remains a key resistance level to reclaim for the bulls and you can see price is still trading within this ascending channel it has been tracking within for the past several weeks. I do like the name and although I haven’t been trading it recently  I think once it can clearly demonstrate the ability to maintain trades above $350 for a few hours will get much more interested on the long side. 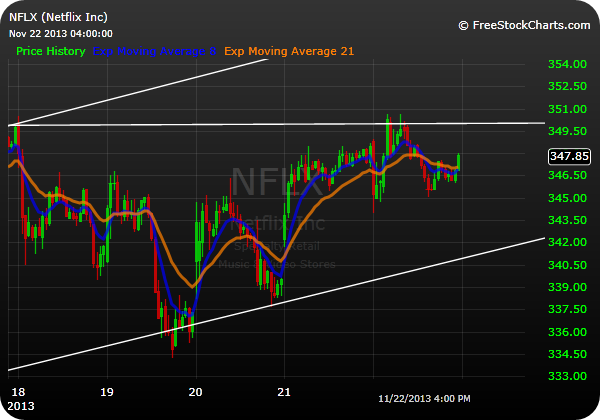 $FB here is a name that I was stopped out in Monday and chose NOT to re-enter for a swing at any point as the week went on. The larger picture chart of Facebook still remains very sloppy and the way it puked back the gains from last week in a single day on Monday makes me much more cautious on this name than others. November 13th was a great bull bar in $FB which basically was the trigger that got me involved in the stock in the first place, just as $GOOG was that same day. The difference between the two being that $GOOG has barely managed to give back half of that days bull move while $FB collapsed giving it all back and then some in one day, on Monday. It certainly is reasonable that FB is just hashing out a large base where lows around $46 are spots to accumulate stock, but for now, it seems like this pattern just needs more time. I will choose to stay away while it churns. 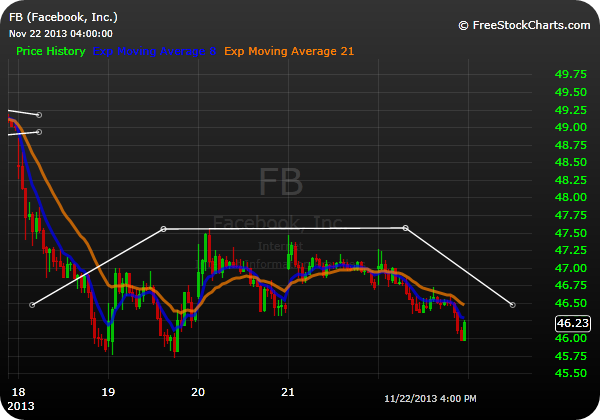 $AMZN saw rotation from my capital as I used the sale from my $FB to pick up shares of Amazon. This was the only stock (from my list) that was able to do what the $SPY did and reverse all of the early losses and end the week higher than it started. 372 area should be a spot to slow it down as those were the previous all time highs and I would not be surprised to see it flag above 370 for a day or two before making its next leg higher. I really like the way it shook out longs this week and I think it looks great for higher. The next trigger long would be clearing Fridays highs around 375, and in the meantime I will continue to hold this name so long as it stays constructive. 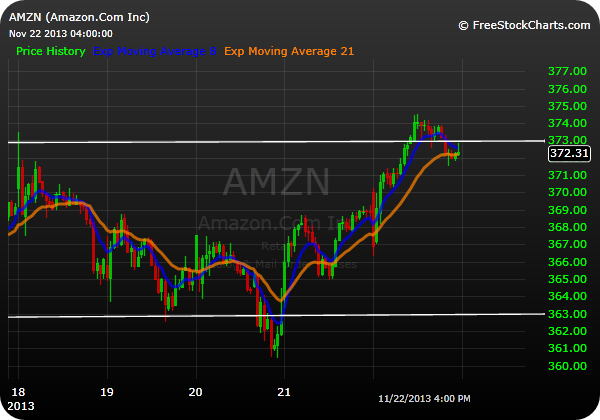 $TLSA deja vu in this chart pattern from last week to now as this is the second week in a row TSLA ends within a descending triangle with a clear floor of support. After breaking down from 135 Tesla began carving out a new level of support this week around 120. I ended up picking some up long on Friday around 119 as it seemed like the sellers ran out of momentum as they probed new weekly lows. By the end of day Friday it did end up reclaiming thursdays lows and is at a real early stage of a reversal attempt. The risk to reward made enough sense to me and I was able to clearly determine when I would be wrong. My stop here will remain tight, new lows below 118 and I am gone. 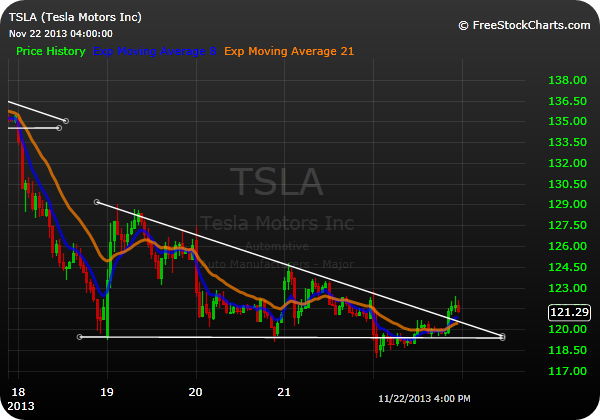