why the golden ratio is responsible for halting this rally

$SPY what an incredible week in the markets. I have expanded out the timeframe on all my charts to hourly this week to get a better idea of where we came from and where we are now. The circus in Washington was a key factor in this near 3 week decline and it was equally responsible for the 2 day ripper we witnessed Thursday and into Friday. Combine market sensitive headlines with technically oversold markets and relatively negative sentiment and you have the recipe for a near 3% rip in the S&P500 from Wednesday lows to Friday highs. Price finished Friday right at the 61.8 retracement from the 9/17  highs which also coincides with the market highs from August making roughly SPY 170 a very logical place for the market to find resistance. Hopefully the title of this post is not taken literally however you will notice many stocks this week found price stalling right at their 61.8 retrace from their impulse legs lower. A move of this size and speed has me believing this is more than your average bear squeeze so going forward we need to watch the commitment to this bounce by measuring how much (if any) of these recent gains we give back going into next week. I would consider an orderly retracement that forms a higher low very constructive but on that same note I do not want to price slam down lower next week in bear market panic type fashion. 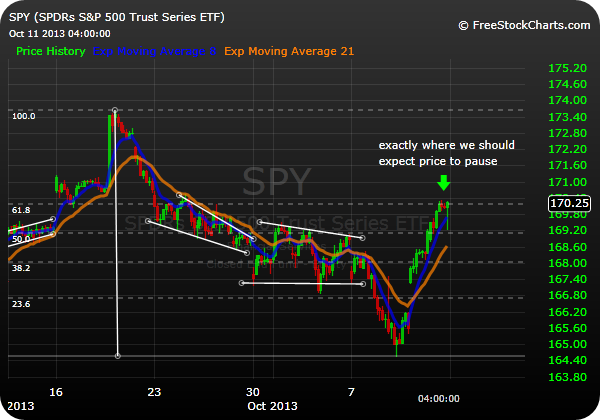 $AAPL I want to start by first having you compare Apple’s chart below with the SPY chart above. A much different, much more bullish story has been developing in Apple over this past month compared to the SPY. I saw a lot of complaints on the stream in Apple, particularly on Thursday while the market was ripping higher, that Apple should have been much higher than it was. Frankly I think this chart is very bullish regardless of how much it participates on any one day. I care about the overall price structure and multi-day action, and to me, this looks like an ascending triangle that is just a day or two away from confirming itself as a continuation pattern to the upside. But perhaps I am biased as I do own Apple long in my swing account with common and options. 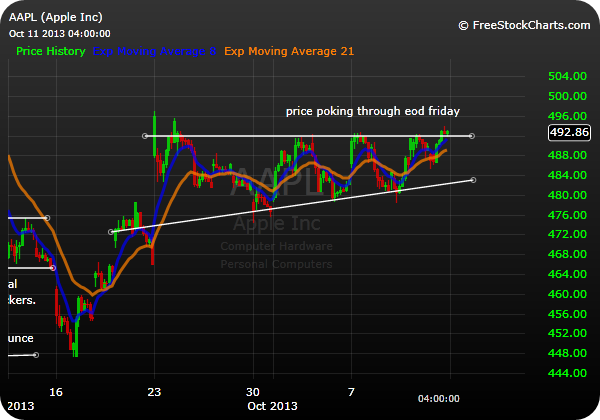 $GOOG I talked last week about the importance of Google holding 870 support otherwise the stock was in jeopardy of tagging the September lows at 850 and we saw exactly that scenario play itself out this week. Buyers stepped in under 850 causing us to sling shot higher back to 870s where we see support has now become resistance – another example of a resistance level combined with a golden ratio retracement putting a lid on higher prices. Intermediate-term, I still think Google will have some problems, one of the weakest on my list. 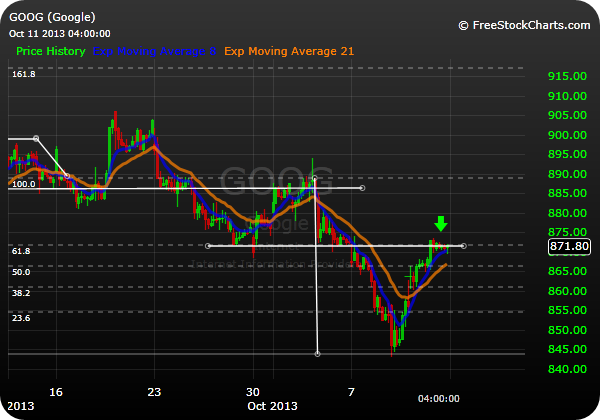 $NFLX I remember hearing a month or so back Icahn saying “I haven’t sold one share of netflix.” Well, perhaps that changed this week because we saw a 12% two-day cannonball in this name really shaking things up. I do not like the magnitude of the decline in Netflix this week and my sense is that if it wasn’t for the well timed analyst upgrade it received on Thursday it may not have recovered as much as it did by week end. The damage done here is a bit scary compared to some of the others but how it acts going forward will be the important part. 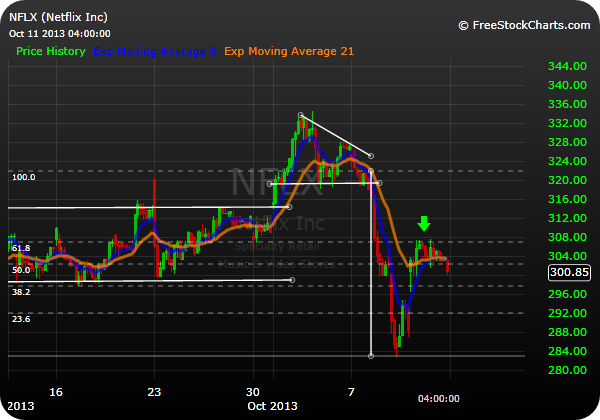 $FB Similar to Netflix, Facebook is another name that got slammed this week however it managed to recover much more of its shellacking by week end without the need of an ‘upgrade’. As I noted on the chart we do need to keep on watch for the potential that Friday’s highs will become the first of a series of lower highs in this name for the intermediate time to come. That is still not confirmed by any means but it certainly is a possibility. This name did recover a lot of the damage and that is impressive, they key now is for the bulls to maintain their pressure and fight back to those 51 dollar highs. 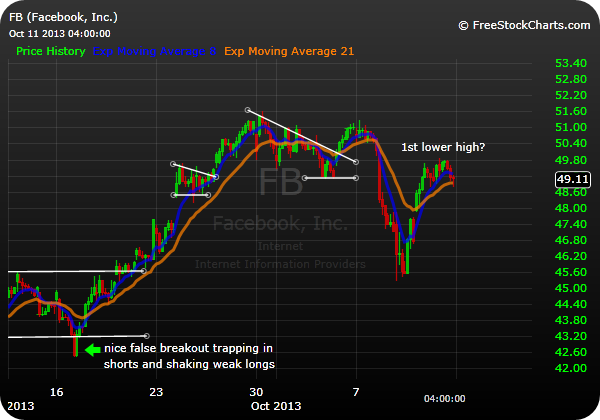 $AMZN I talked about the tight pattern that was developing at all-time highs in Amazon last week and how I was uncertain which direction the resolve would be. Well it is no surprise that the market took down Amazon with it causing a breakdown from the ascending triangle and a retest and slight overshoot of the 300 price level. The encouraging sign in Amazon was the magnitude of the retracement going into the week end. We are just about back at the breakdown levels so it will be important to see how price reacts to this overhead supply. Not my favorite setup on the list and I will need to see more action play out here to gain a sense of direction. 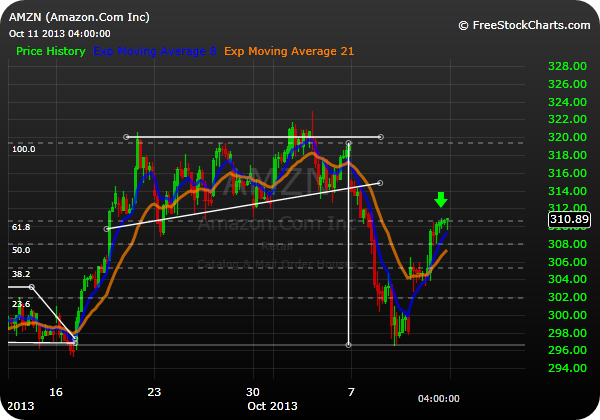 $TSLA was really just ahead of the game last week when we saw a technical breakdown from the rising channel off of the news one of their vehicles catching on fire. For a second week in a row volatility was no stranger to this stock as it completed a second measured move lower into the 160 support level before finding buyers. At this point it is difficult to determine what the overall price structure is trying to tell us in this name. It is possible we could see a retest of 186 this coming week creating some sort of range bound action between 160-185 or perhaps price fails to retest 185 and it stalls out making a lower high. One thing for certain is these bounces do contain a bit of strength off of these thrusts lower indicating bulls aren’t going to give up without a fight. This is one to keep on your radar for next week. 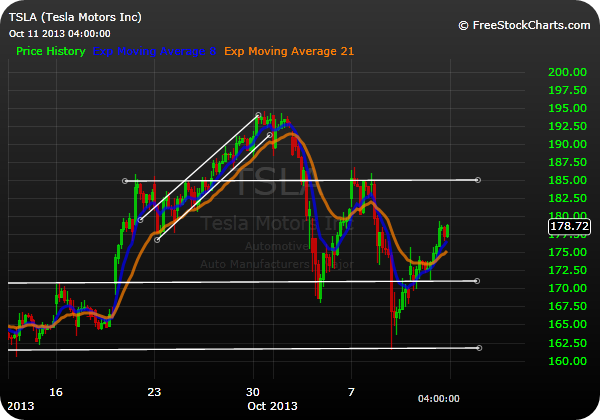