why the market is ready to leave you behind

$SPY what amazing continuation to new all time highs this week in the S&P500.  The past two weeks price action really goes to show you how fast you need to react so you are not caught flat footed without a plan. If you were not ready to step up, change gears and get long some names then you could very easily find yourself left in the dust still thinking about the government shutdown, the debt deal, and continued doom in the markets. After we had that breakaway gap back on the 10th you were forced to jump in, pay up, or be left behind. Sure it’s easy to say that now in hindsight but this is why it is so important to have a plan and remain objective because this was an uneasy move to catch if you weren’t already in a buy the dip mindset waiting for reversal signals as we probed lows.

Looking ahead to next week, we covered a lot of ground real fast in these two weeks and now that we have pushed new all time highs it is possible we see a pause and retracement in price or time as some of these short term overbought signals work themselves off. But the speed and magnitude of this recent move has me believing a lot of investors were offsides here and are probably still not involved heavily to the long side. If that truly is the case then the market will not make it easy to get back on board which is why it is very probable we see a continued melt up and epic year end chase. Are you a believer, or do you think this is one final bear squeeze higher before rolling over? 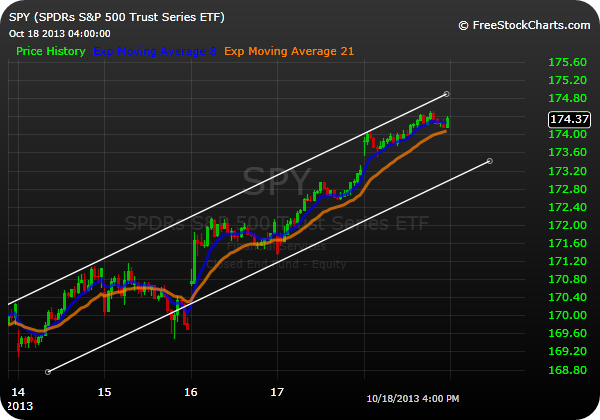 $AAPL textbook breakout above the 493 resistance level I have been watching and a slow but very orderly trend higher into the 500s and above 505 resistance. Apple has a product announcement coming up Tuesday 22nd and then earnings to follow on the 28th.  All looks great ahead of those events as the ball is firmly in the bulls courts. Back in August we made highs topping out around 513 before rolling over into the iphone 5s announcement and now after a solid 2+ months of digestion the market is once again challenging these levels. Apple spent 15 trading days wedging up against 493 resistance and now that it is 15 points higher I see a lot of investors interested in a pullback to get involved. 15 days of wedging in my mind creates more upside fuel then 15 dollars, combine that with sentiment interested to get involved gives even more probability to the chase scenario playing out in this name. disclaimer: I still own apple in my swing account. 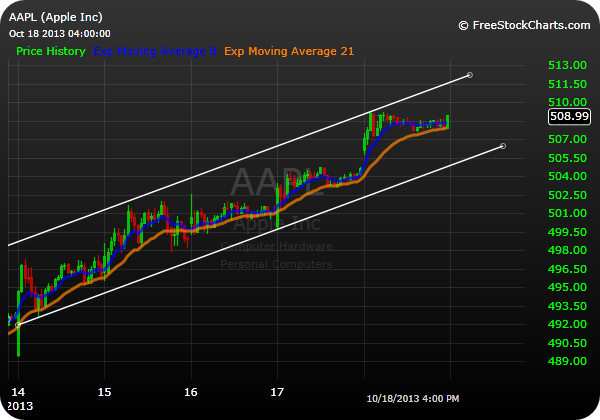 $GOOG just when everyone forgets or leaves Google for dead they announce a spectacular earnings quarter rewarding long shareholders more than a $100 gain in 24 hours.  I am only showing Fridays action in this chart because I think the more interesting thing at this point are identifying new support and resistance levels going forward at these price levels. Sure seems logical that Google could use some healthy digestion after this overnight push but at the same time I really wouldn’t be surprised for another 50-100 points of upside before really beginning its digestion process. Remember when Facebook popped from 26 to 34 off of their earnings report and now 3 months later it’s 54… lets not rule that scenario out with Google.

$NFLX new all time closing highs in Netflix as it continues its 2013 bull run. It has fully negated the nasty 3 day sell of earlier this month with a quick tap of the 50 day moving average and now its back to doing what it does best, making new 52 week (and recently all time) highs. Earnings are tomorrow Monday October 21st  and we are about to get a dose of reality and see whether or not the market has gotten ahead of itself in this name. Sure will be interesting. 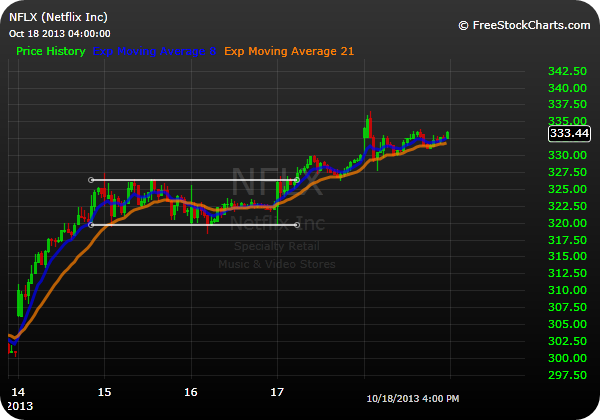 $FB let the good times roll. Similar to Netflix the nasty 2 day sell off from earlier than this month has been fully recovered and then some. New all time closing highs and we even saw an acceleration to the upside on this past Friday with a gap higher into the 54s. This is another name that will be very interesting into earnings to see if the market has gotten ahead itself in this amazing 3 month ramp up. All time highs = no upside resistance  = great short term trading vehicle to the upside. 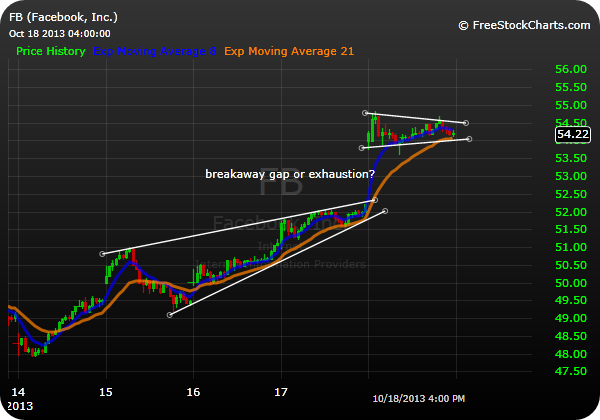 $AMZN speaking of all time highs here comes Amazon getting vertical on Friday with a very nice gap above the 310 resistance wedge that was building for several days. All time highs, no resistance above us, what more needs to be said? Watch for earnings and enjoy the ride in the meantime.

$TSLA unlike Netflix, Facebook, and Amazon, Tesla has not made new all time after the early October sell off. This doesn’t mean we should be bearish on the name it simply means we should keep these stocks in context given Tesla trades similar to the momentum techies. It spent the week digesting the gap up from Tuesday the 15th and quite honestly this still looks very bullish. 180 is your line in the sand if you are a bull and if your interested in getting back involved in this name for a retest of the highs then watch for an upside breakout from this descending trendline. 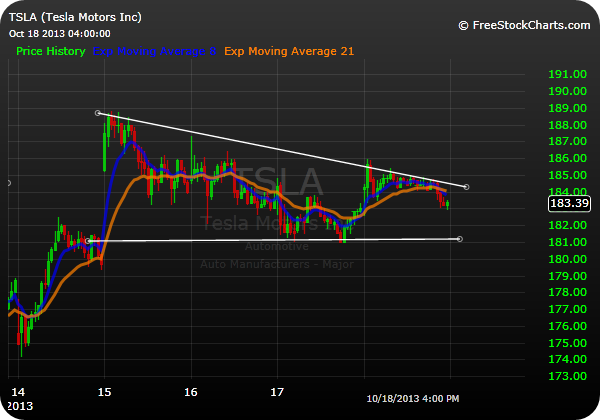