why todays apple action changes everything 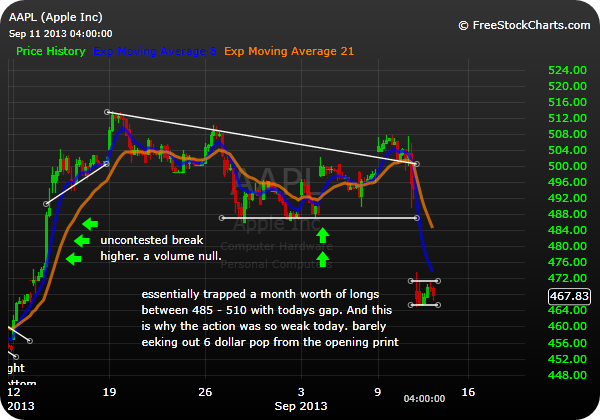 Well yesterdays post was titled why today’s action changes nothing and given today’s brutal gap lower I felt it necessary to write a quick follow up.

First I do stick by the post I wrote yesterday. Yes the rejected breakout and action into the close yesterday was bearish, and yes 485 was the support level on watch, so one could infer we might test that level today, perhaps break, but I don’t think anyone expected what we got today and if you did, please e-mail me your market predictive secret. The point of yesterdays post was to drive home the point nothing had changed in the “larger” timeframe chart and we needed a second day to confirm anything.

Now onto todays action. Now that we have confirmation with authority lower lets talk about why it happened the way it did and what to expect going forward. Look closely at the chart above and notice how we got to the 500+ price level in the first place. It was in straight line fashion (literally) with no real supply in between. Because of this volume null below 485 price was free to waterfall lower once 485 support was broken. This is why pre-market initially traded in the lower 480s and swiftly continued to fall into the market open. There was no previous supply or pivot levels to prevent price from falling until about 470.

I think of todays gap lower effectively as an island top trapping the past months price action (even though we know it wasn’t a legit one) given the way price rocketed to the 470+ levels in the first place. Assuming most of those “trapped” longs were liquidating positions throughout the day this is what really kept price fairly muted today with no real snapback bull bounce.

460-470 level would seem to be a good spot to get long Apple again IF it had gotten there in a normal and gradual flag type fashion. However when we slam into it in a 5% gap down fashion that is not the time to be aggressively getting long. We need lots of digestion through time or further correction down before any chance of Apple returning to its previous uptrend. Sure we can have a corrective snapback but I think Apple at the very least needs time to get its act together.