A Collection of Indicators In Extreme Territory

Monday, February 5th was an impressive session for markets:

I guess the market gods were upset over the Patriots loss after all.

Even though this unwind has happened “fast” in terms of trading days & hours, the actual selling has been intense.

First, take a look at the # of S&P500 stocks closing above a 10-day moving average. It finished at just 10%, a 3 standard deviation move lower which hasn’t been seen for multiple years: 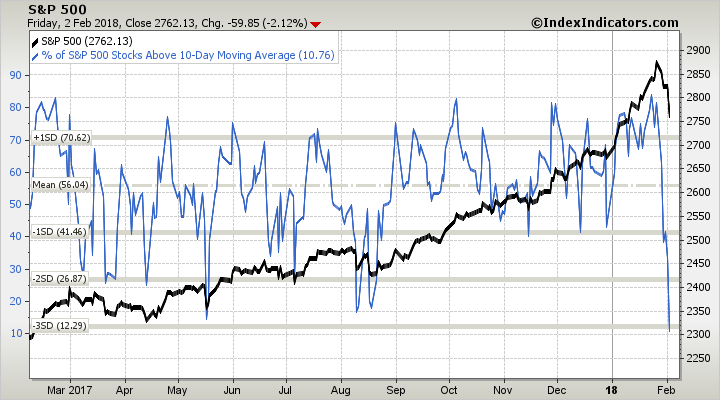 Next, take a look at the McClellan Oscillator $NYMO which hit its lowest reading since 2011:

The list goes on of indicators that have quickly moved into “extreme” zones signaling that:

All of the above readings speak to short-term “exhaustion”, but when trying to get a handle on the longer term health, I like looking at the # of stocks making 52-week highs/lows.

We can see here, the # of stocks reaching new lows is hitting new multi-year highs while new highs dry up.

What will be interesting to watch over the coming week is whether or not this flare-up of new lows turns into a late 2016 scenario of just a couple of weeks of fear, or if we are in store for a more prolonged period of volatility and uncertainty like late 2015.

When volatility picks up, I like watching market internal indicators like the ones above for signs of divergence and extreme readings to help give me context and confidence to execute on my trade signals.

What everything above tells me right now, based on our strategy & time-frame: