Bitcoin is an asset class that I’ve been following closely since 2013 both as a technology enthusiast and a trader. The explosion in price from $13 per coin to over $1,000 during just that year was evidence enough to me that this cryptocurrency had some merit. 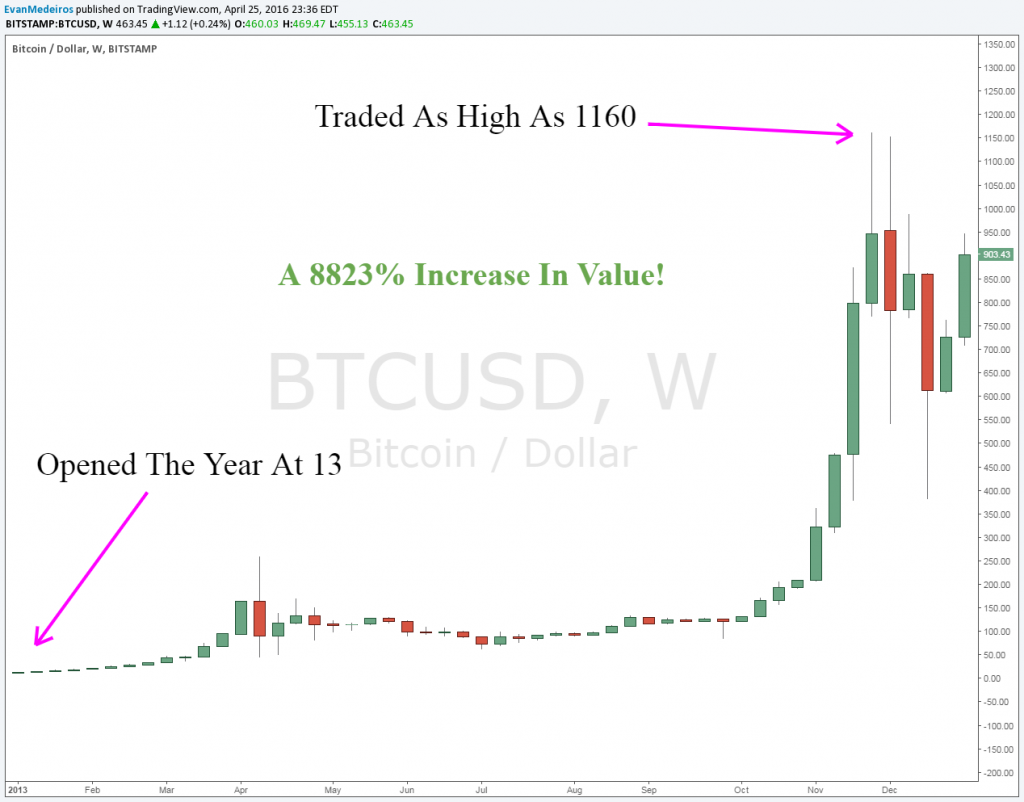 Around this time I began trading bitcoin on an exchange called Bitfinex.

It was wild times in early 2014, volatility was extremely high.

My favorite trade setup was fading extreme weakness and strength. I’d wait for price to make outsized $40+ straight line pushes up or down, often times only taking just 5 or 10 minutes, and begin scaling into limit orders above or below the market as it gasped for liquidity.

Spreads moved and widened out so quickly it wasn’t uncommon to buy at say, 691 and 1 minute later flip it right back to the market at 708.

Flash forward a few months and the largest bitcoin exchange Mt. Gox melted down and evaporated hundreds of millions of dollars worth of bitcoin in the process. It was about that time I decided having cash on Bitfinex, a company that had hardly any documentation at the time, based out of Hong Kong, was a bit risky.

To be clear, I never had any problems with Bitfinex, I contacted support on a couple of occasions and they were always helpful and responsive.

I pulled my cash off the exchange and sat sidelined for most of 2014. It wasn’t a bad thing, as price did nothing but retrace the epic run up from 2013. Every bounce attempt was met with sellers.

Bears were in control throughout 2014. 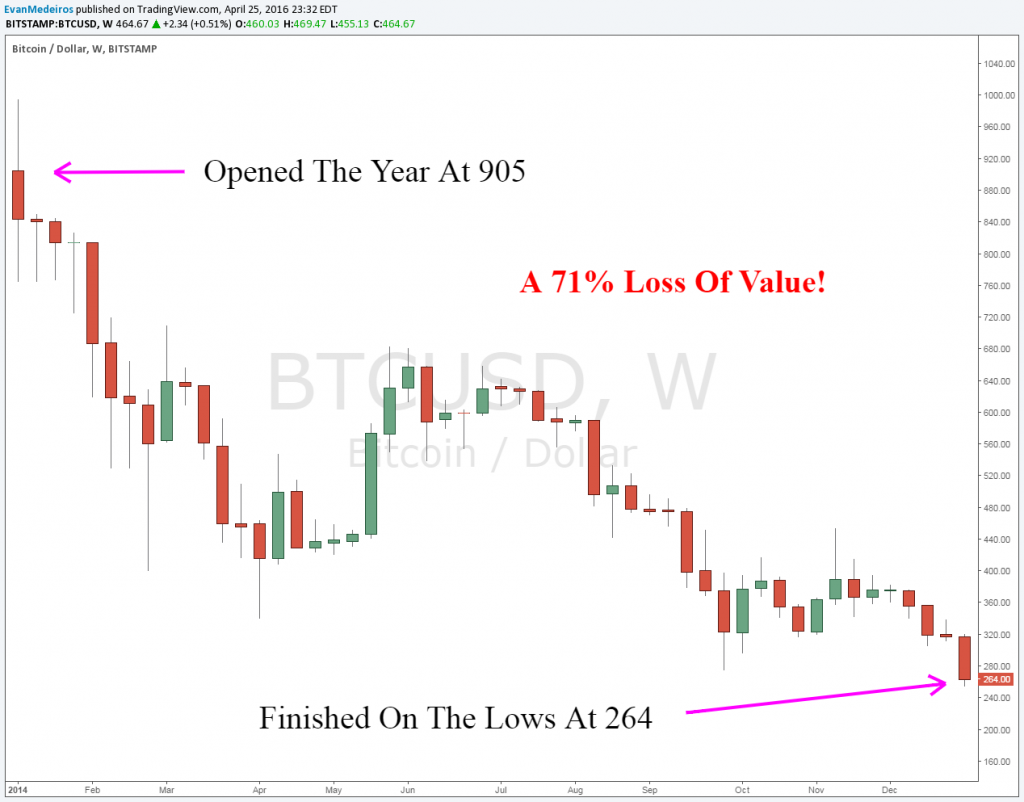 It wasn’t until 1st quarter of 2015 when things started to get interesting again.

The downtrend was beginning to slow down and price started showing signs of stabilization.

Most of the headlines at the time were writing off bitcoin for dead – a bubble, a fad – challenged as alternative cryptocurrencies were on the rise.

But despite the noisy headlines, something very important happened in October 2015.

Something that actually mattered. 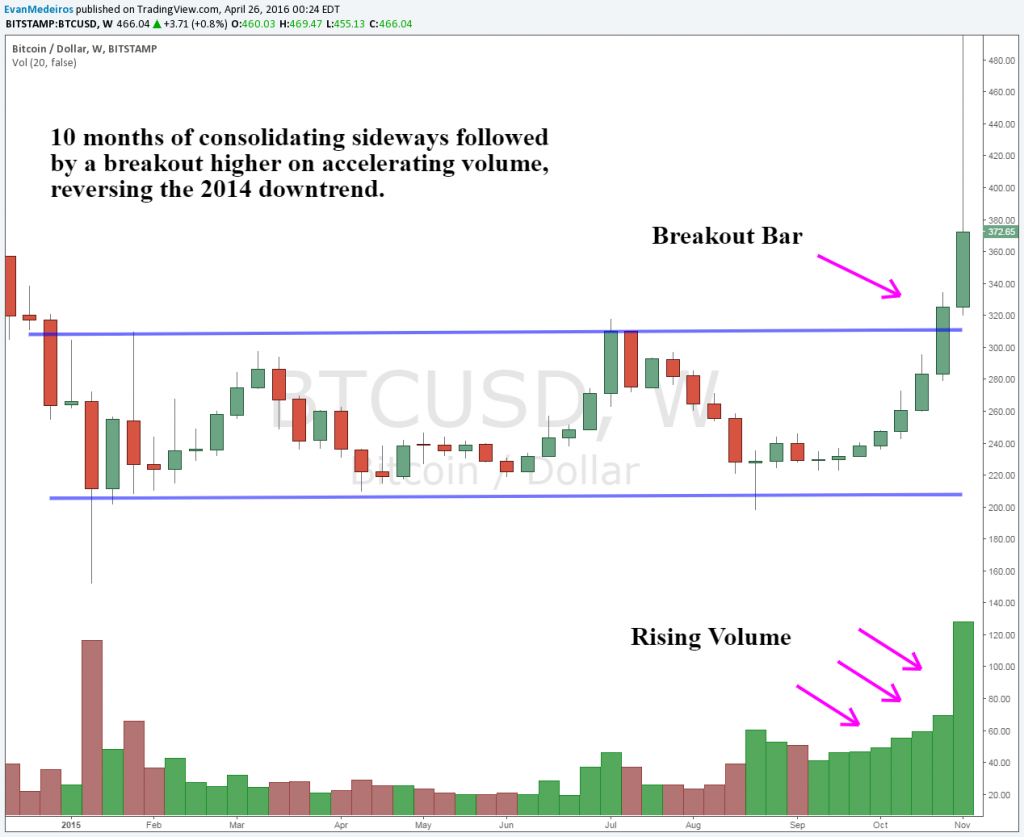 That was a big change in character.

This confirmed buyers were once again regaining control and reversing the downtrend, which is exactly what I wanted to see to get back in.

I missed the initial breakout, but as soon as the market began pulling back I began aggressively averaging into the bitcoin.

I bought bitcoin 8 times over the next couple of months. 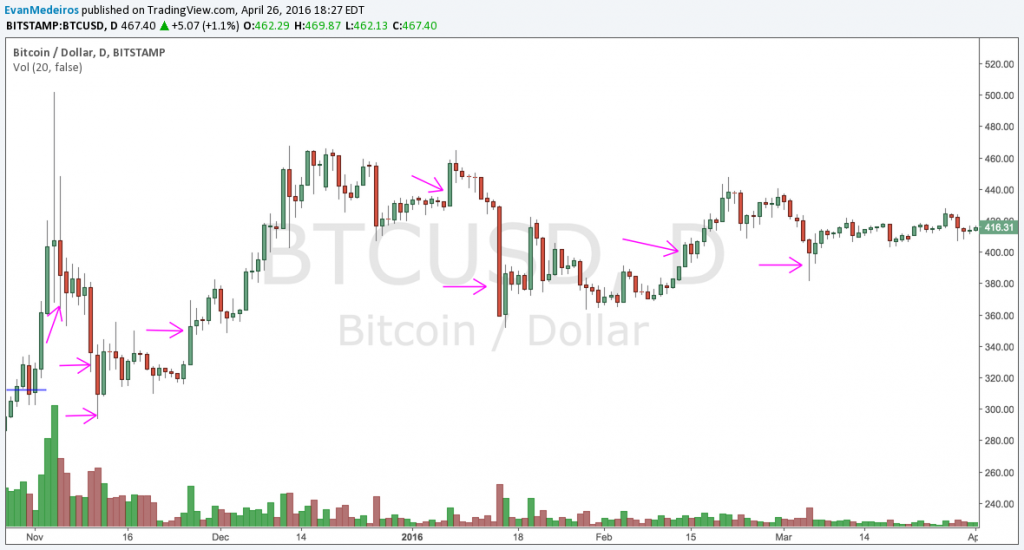 Each arrow represents a buy point. My average price is $361.

Heading into 2016, bitcoin was on the rise and I was bullish on all time-frames.

I concluded the near-term lows were in based on the late 2015 breakout and anything down to 350 was a buying opportunity until proven otherwise.

Flash forward to April of 2016 and here’s the setup in bitcoin. 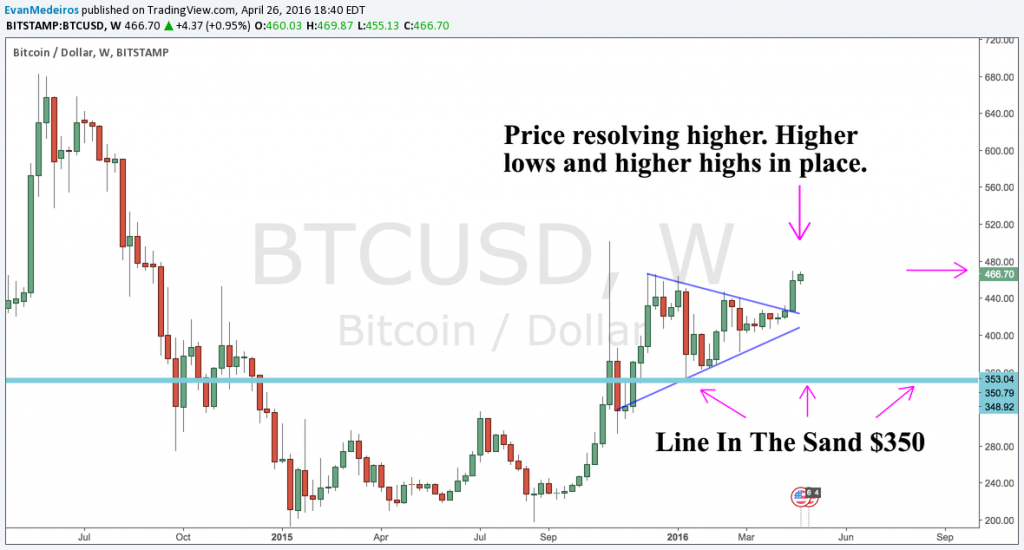 After several months of consolidating between 350 and 450 the bulls are once again dominating the price action and are in the process of trending us higher once again.

If you are a long term bitcoin bull (or just a trader looking for a market with bullish momentum) you finally have enough evidence that buyers are once again in control.

Most importantly, you have structural levels to trade against and measure your risk.

For me, I’m using $350 as my line in the sand. If we broke below that level, it would signal to me that upside momentum isn’t quite ideal and, at the very least, we would need more time to consolidate.

350 is the level in which my timing is wrong, and I would no longer be so bullish.

If you want to give your trade (investment) even more room, then the lows from 2015 around $200 would be your mark.

Either way, you have a calculated exit point rather than just attempting to catch a falling knife like so many did throughout 2014.

It’s been a long time since bitcoin bulls had something to get excited about and hopefully this brief history overview and look into key price levels has given you some perspective.

If you have any questions about trading or the bitcoin market specifically, leave a comment below.