Chart pattern trading falls under the category of technical analysis and represents one of the most popular approaches to making buy and sell decisions using charts.

We as humans love forming patterns in all areas of our lives and analyzing price charts is no different.

I don’t personally consider myself a chart pattern trader, but many of the conclusions we draw in our market analysis videos or the stock scans we’ve built in our store do overlap with these classic chart patterns.

Given the high interest in the topic, and the often misunderstood or misrepresented nature of pattern trading, I reached out to one of the most qualified traders that I know on the subject to help answer a few questions.

Please enjoy this interview-style post on all things chart patterns from Suri Duddella, whose bio follows:

What exactly are chart patterns? Why do we see them occur time and time again?

Charts are used by most technical analysts to read the price history of a stock at a glance. Traders and analysts use charts to determine the direction and strength of the underlying trend.

Price-action is a true reflection of market psychology.

Traders react to prices and price-levels as they oscillate between overbought and oversold conditions and bounce between support (demand) and resistance (supply) levels.

In doing so, recognizable and repeatable structures called price patterns or chart patterns are formed.

Technical analysts and traders look for these patterns for their repeatable nature and forecasting value in the charts.

Patterns are provided with easily recognizable names such as:

How many chart patterns are there? Should we treat them all equal or do some have higher odds of success than others?

There are two primary types of chart patterns: continuation patterns and reversal patterns.

Reversal patterns terminate the prior trend, reverse, and begin to trend in the opposite direction. Examples of reversal chart patterns are: double bottom, double top, and head & shoulders.

The study of these patterns is essential for traders as they provide various opportunities to analyze price and trade for profits.

Most pattern structures are bound by supply and demand lines and trendlines within key support and resistance levels. These are chart patterns such as: channels, head and shoulders, double tops and double bottoms.

Fewer patterns have some type of curve structure such as: cup & handles, parabolic arcs, and saucers.

There are about 20 unique geometric chart patterns and maybe another 20 variations that cover the entire known patterns universe.

Some of these chart patterns are more frequent and easier to detect than others.

Fortunately, it is not essential to know all of these patterns to be a successful chart pattern trader. Knowing just a few (2-5) and mastering their specific conditions of how they succeed and how they fail are all most traders need.

Pattern success greatly depends on their underlying market context. Patterns must be studied for their location, size, symmetry, and existing trends.

Can you show us some examples of patterns you’ve recently traded?

I trade chart patterns intraday using futures markets and also end-of-day on individual equities. Here are a few examples of some of my trades:

Like we discussed above, patterns must be traded with trends and proper market context. On March 14, @NQ developed an intraday ABC pattern as the underlying trend (eSIX indicator) traded above the ZERO line.

The automated algorithm I developed waited for eSIX to confirm trend and the ABC bullish pattern and entered into a long trade around 7072. The stop level is below the red stair-step lines at 7064.

The strategy exited the half contracts (3) at 7092 and the trailing stop was also raised. When price closed below the TrailStop indicator level 7089, the second target was abandoned and the trade was exited.

During 2017, $CVX formed a cup & handle pattern on the daily chart.

In October 2017, C&H pattern first traded above the breakout level without forming a proper handle structure. I look for charts which have both cup and handle formations so no trade was initiated.

A couple of months later in December 2017 price formed a proper handle and closed above the breakout level with confirmation from the eSIX trend indicator.

Upon reaching the first target, the energy sector started to correct. The TrailStop indicator was tracking at $129 and when prices started to drop below it the trade was closed out at $128. 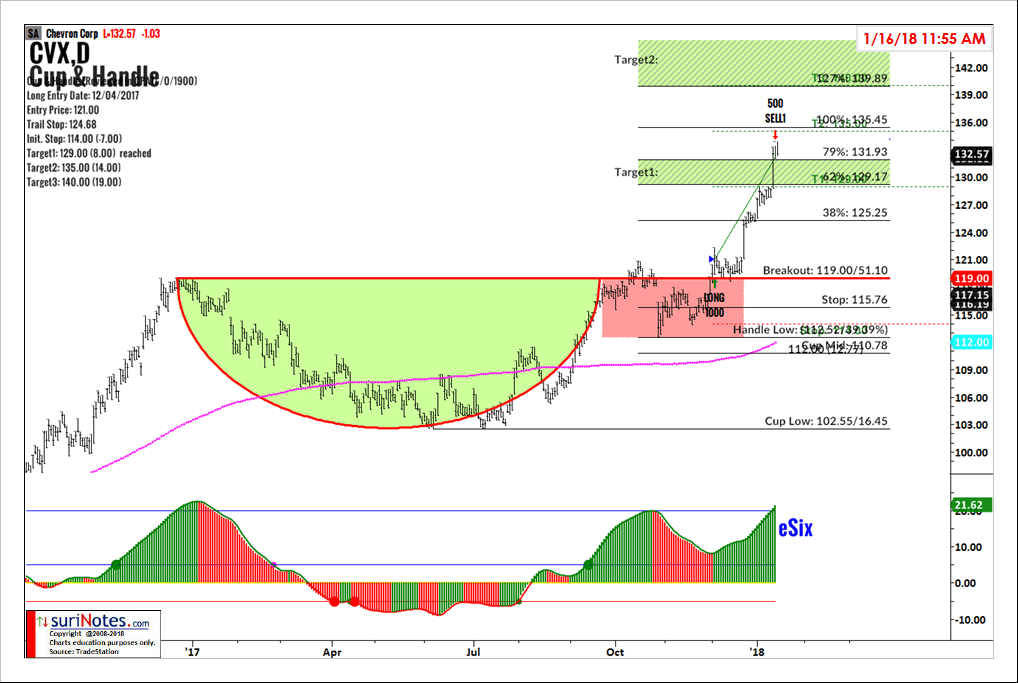 Here is a similar cup & handle pattern in $SWKS weekly chart that resulted in a loss due to negative news on the sector.

Late November 2017, SWKS closed above its breakout level (after forming a valid handle structure) and a long trade was entered at $115.2.

Within two weeks, SWKS started to retrace back into the handle structure. The conventional stop for the C&H pattern is the middle of the handle ($102.94) or 8% stop loss below entry ($105.50) and the second stop is about 15% below the stop entry.

As you can see in the second chart, both stops were hit and trade was exited around a 12% loss overall.

The following charts show an ABC bullish pattern in Intel ($INTC) and how it was traded using options.

This pattern was also supported by the eSIX bullish trend indicator.  The benefit of ABC bullish and bearish patterns is that they show both price and time targets which help when structuring option trades.

Using ABC price and time projections in this example, INTC targets are estimated to be near $40 in October 2017. During August and September 2017 months, INTC October 40 calls were trading below 0.10c.

Long October 40 calls were accumulated over the next few weeks and the bottom image shows the exits of INTC Oct. 40 calls in mid-October. 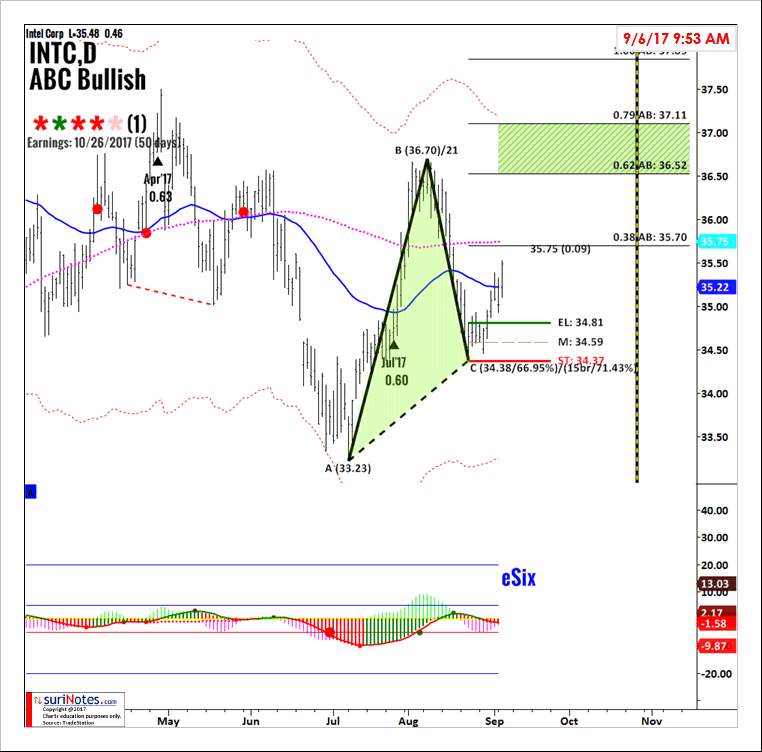 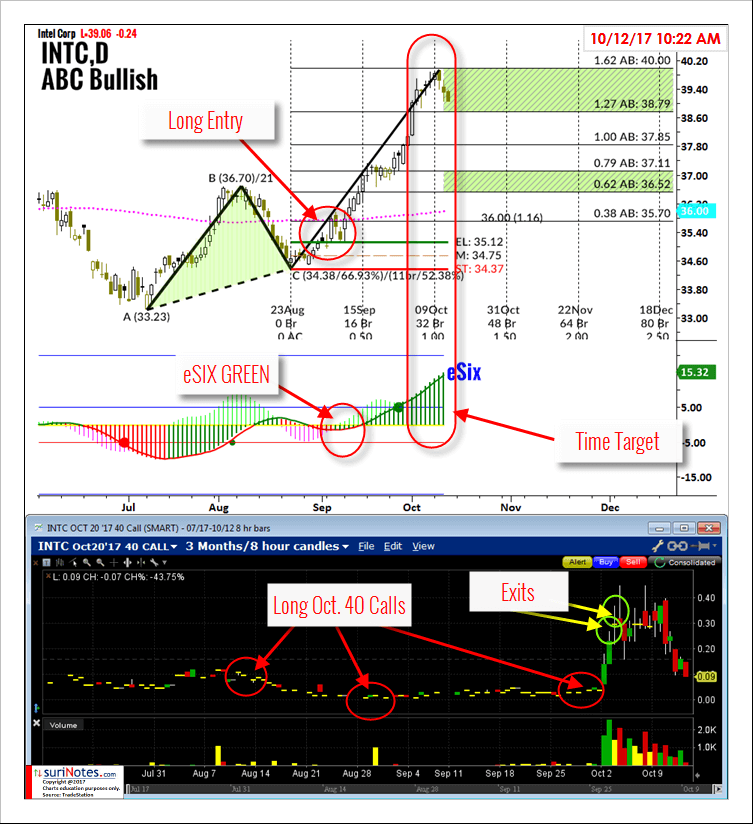 What do you think most people get wrong when trading chart patterns? Any common mistakes you see beginning pattern traders make?

I believe some of the most common mistakes made by traders is that they do not fully understand the pattern structures, their validity, and their formations and execution rules.

I also think many traders force patterns when they do not actually exist.

In my view, many academics and analysts perform a basic research only on chart patterns and publish erroneous results on their merits and demerits.

Very few of these academics are true practitioners of what they write hence they never truly account for market context or market internals when qualifying and validating chart patterns.

Traders need to be more cautious about their pattern testing methods and results.

Any final tips or advice you now know after trading thousands of patterns that you wish you knew when you started?

Here are a few general facts and tips about chart pattern trading:

I really enjoyed everything Suri shared with us on these questions.

I was most surprised about the level of detail and precision that goes into properly classifying chart patterns. I now know that I am guilty of too quickly sticking a label on price formations without giving enough thought to things like symmetry, slope, and the overall time it took to form each piece of the pattern.

Seeing how Suri uses automation and a collection of technical indicators to classify and qualify his setups really makes a whole lot of sense and shows how experienced traders approach this discipline.

I hope you found this interview as helpful as I did and if you do want more educational lessons just like this, be sure to check out our learning center. To find out more about what Suri is up to, check out his website at Surinotes.

Thanks so much for reading and good luck out there.