Every trader should think in R-Multiples

Do you find yourself buying stocks using arbitrary round share sizes? Do you position size based only on the distance to your stop loss or vary size based on your conviction in the trade?

If you answered yes to any of these questions, then today’s article about R-Multiples is going to be an important one for you. Even if you don’t resonate with anything above, the concept of R and R-Multiples is one that all traders should learn since it helps improve risk management and your long-term survivability in markets.

We can all thank Dr. Van Tharp an author, publisher, and professional trading coach for coming up with the terminology of R and R-Multiples.

What is R and what’s an R-Multiple?

This first part should feel pretty straightforward, your R is simply the risk you are initially accepting in a trade in order to achieve your profit objectives.

Once you have your R defined you can now measure the outcome of your trade as a multiple of your initial risk (R).

Trade examples of R and R-Multiples

Let’s take a look at a couple of trades from our Merlin Trading System back in 2020.

The first was a multi-week swing trade in Inovio Pharmaceuticals:

The second swing trade was GrubHub and we held it for about a month:

Both were clearly profitable winning trades, but INO had a bigger percentage gain, so that must have been the greater $ winner and better overall trade — or was it?

If Merlin equal-weighted the position size on every trade then that would be a fair assumption to make, but our trading system doesn’t do that. It has a variable position size algorithm based on the individuals stocks perceived risk.

Now that we know our starting bet size was different in these two trades, how can we compare the two results? You guessed it, we need the starting R or R-Multiple results.

With this information, we can now clearly see that the GRUB trade was 3X better from a risk-adjusted standpoint than INO.

That means even though the GRUB’s signal % return was smaller, the GrubHub trade was:

More net dollars were made in GRUB since Merlin risks the same ratio of its account size on each trade (aka 1% risk per trade).

R-Multiples are a measure of profit

Hopefully, the examples above illustrate how intuitive and easy it is to represent a collection of trades based on their profitability. When you are reviewing past performance on individual trades it is very easy to pick out the stand-out winners and losers.

For instance, if you closed 200 swing trades in the last calendar year the first step you should take (if you haven’t already) is to compute the R and R-Multiple for each individual trade. Next, you should sort your list of trades by R-Multiple profitability. Finally, you should review the distribution of trades and most importantly the extreme R results.

Brainstorm how you can maximize the good and minimize the bad.

Risk-adjusted performance is a concept we think a lot about at the Trade Risk.

Most traders like to focus on the upside: the wins, CAGR, and total returns but that’s not what’s going to help you survive as a trader. Yes, it’s great to focus on making money, but you need to have a firm understanding of the risks required to achieve those rewards.

You may desire to compound your trading account at 50% per year, but if you peel back the onion a little bit and see that you’ll need to use leverage or take large concentrated position sizes to achieve those types of returns you may not be able to stomach the volatility and drawdowns over time to reach your profit.

Individual trades are no different.

If your biggest dollar winner this year was a small-cap stock that earned you $1,750 but only ended up being a +0.34R trade then I would argue that was not your best trade at all. You had to assume a lot more risk, in order to achieve those gains.

Here’s a great trading rule (reminder) that all traders can benefit from: You should never have losses more significant than -1R.

There are always going to be some situations that might be out of our control such as larger-than-expected overnight gaps, circuit breakers, or halted stocks. But outside of situations that prevent you from actually executing your strategy, having a greater than -1R result means you did not honor your original risk budget or anticipate risks (volatility) accurately and that’s something that requires some fine-tuning.

Buying stocks is the easy part. Anyone can open up their Robinhood account, type in a ticker, and slam the big green buy button. But where are you going to exit? When is it time to sell?

R-Multiples by themselves aren’t going to give you an edge in markets, but they can give you guidelines and help set expectations for your trades. If you are conscious of the initial risk you took in a trade and are thinking about reasonable profit targets then you at least have some measurement to guide your decisions. 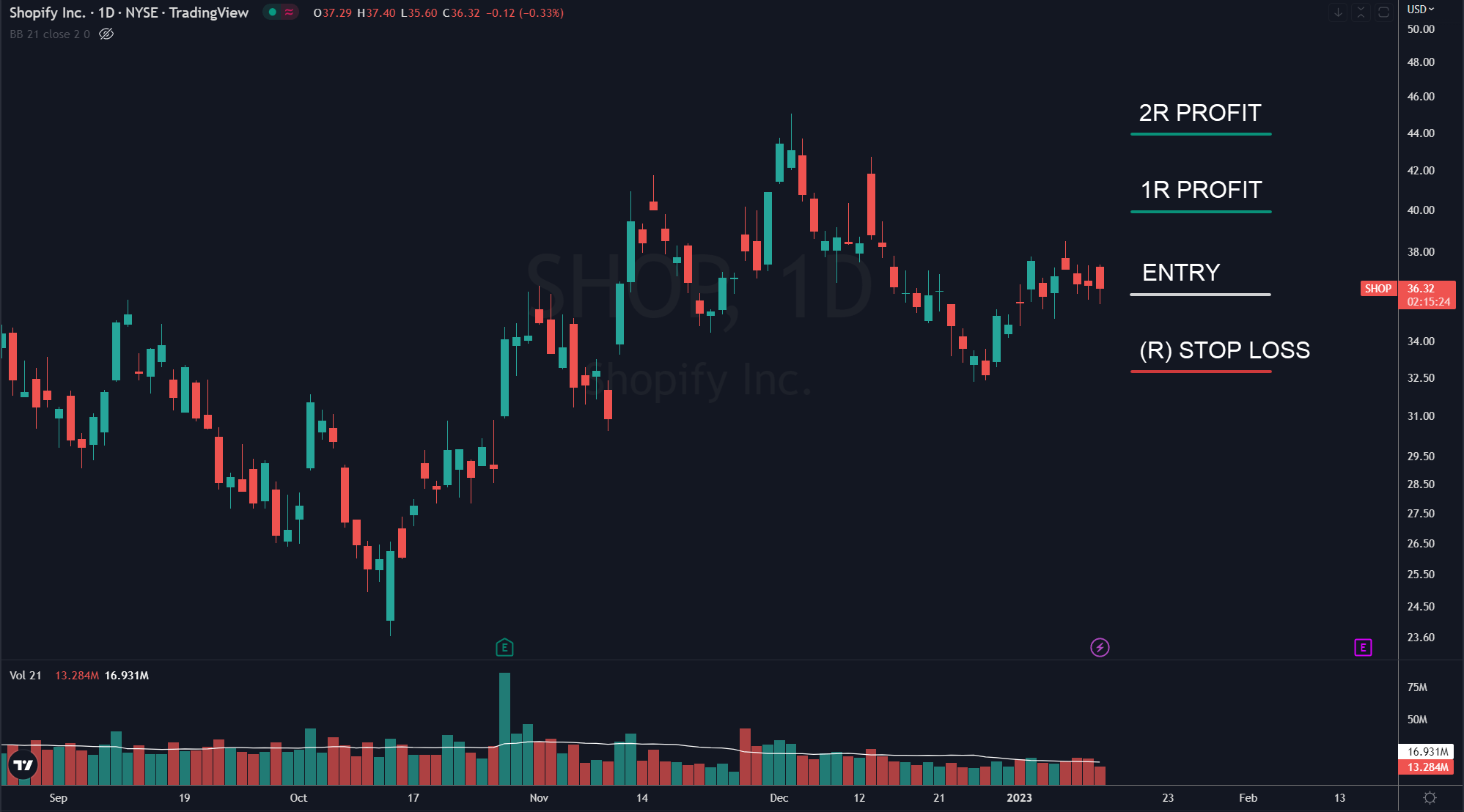 Conventional trading wisdom says you should always strive to achieve 3-to-1 or 5-to-1 on the risk you are taking on a trade. I’m not going to say that’s a bad idea or the wrong way to approach trades, but I also wouldn’t dismiss 1-to-1 trades or 2-to-1 trades, which we discussed in greater detail in our how smaller profit targets can improve your trading article.

Don’t forget, your strike rate or win percentage is the other important half of your expectancy equation. I would much rather trade a system with a 1-to-1 reward/risk ratio and 70% win rate over a 3-to-1 system with a 30% win ratio.

Every trader should think in R-Multiples

The math behind R and R-Multiples is straightforward.

What’s really important is the mindset.

R-multiples help you think about risks in a more professional way and they also get you thinking about trade efficiency in a smarter way. That’s the real value of using them and why I think it’s an important integration for all traders and especially those getting started.

I hope you enjoyed this article. Have a comment or question? Leave it below.